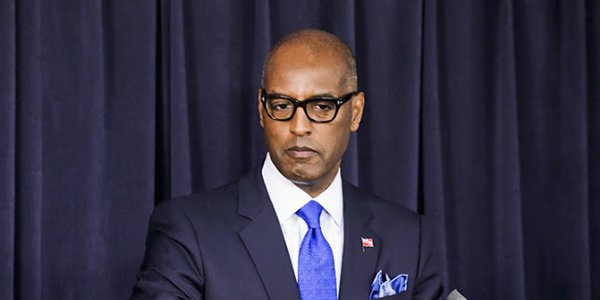 HAMILTON, Bermuda (CMC) — Bermuda’s Curtis Dickinson, a former banker-turned-politician whose shock resignation as Finance Minister just days before he was due to deliver his national budget in Parliament has caused upheaval in the ruling Progressive Labour Party (PLP), says he intends to concentrate on his job as a constituency Member of Parliament.

But he would not be drawn on his resignation from the key post, telling the Royal Gazette newspaper he was not ready to go public with the reasons for Monday’s dramatic exit from the front bench.

Well respected across politics and in the financial world, 55-year-old Dickinson was talked of as a future premier of this British Overseas Territory, which is currently tackling a national debt of three billion US dollars, exacerbated by the coronavirus (COVID-19) pandemic.

The Gazette said it understood the resignation may centre on disagreements over a deal with Miami-based developers Gencom and renovations at the currently closed Fairmont Southampton resort, although no official reason for Dickinson’s decision to quit has been given.

Premier David Burt, who held the Finance portfolio before Dickinson took it over on November 1, 2018, earlier thanked Dickinson for his services, saying “Bermuda has been well served by Minister Dickinson’s steady and thoughtful hand at the helm of the government’s finances and fiscal strategy.

“Minister Dickinson led the financial support response to the pandemic and invested tremendous personal energy and commitment to ensure that the needs of the Island’s workforce were met as people were impacted by the necessary strict public health measures,” he said.

“Personally, I know the immense toll that an individual’s public service takes on families, and in thanking Curtis for his service, I must also recognise the sacrifice of his wife and children during this unprecedented period of economic strain for Bermuda.”

Opposition Leader, Cole Simons, whose One Bermuda Alliance (OBA) party holds six seats compared to the PLP’s 30 in the House of Assembly, praised Dickinson and said his abrupt departure so close to the budget — was “alarming” and “painful”.

Dickinson’s resignation leaves two gaps in the PLP’s ranks, as Burt has still not announced a replacement for Curtis Richardson, who quit the Upper House last month.

Dickinson, who had enjoyed a banking career at home as well as in the United States and United Kingdom, entered politics in June 2018 when he claimed a seat in the House for the PLP after winning a by-election in Warwick North East in June 2018 and joined Cabinet less than five months later. He switched to the PLP safe seat of Pembroke South East, which he easily won, in the 2020 snap general election.