Blyden Gets One-Month Suspension From Senate, Removed as Majority Leader 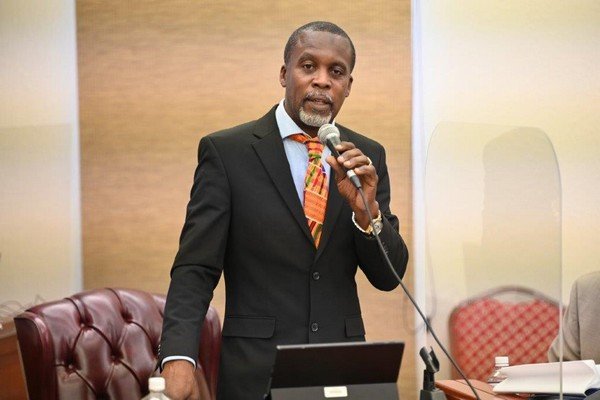 (VI Consortium) Senators Thursday evening voted on and approved a resolution that sanctioned Senator Marvin Blyden for flouting V.I. Dept. of Health protocol when he failed to quarantine after testing positive for Covid-19, stripping Mr. Blyden of his majority leader position while suspending him for 160 hours from the Legislature, or one month. Previously, the Committee on Ethical Conduct, which came up with the sanctions, had included a four-month suspension, but the punishment was dramatically reduced.

Mr. Blyden was “suspended without pay for a period of 160 working hours from all legislative activities, including sessions, committee meetings, caucus meetings, and any other meetings or activities held by the Legislature. The suspension commences the next calendar day after the adoption of this Resolution,” according to the resolution.

The suspension does not affect the senator’s staff and Mr. Blyden’s ability to manage the affairs of his senatorial office.

“For failing to act with dignity and respect for the high offices he holds, Senator Marvin A. Blyden is removed from the office of Majority Leader upon the adoption of this Resolution,” the resolution further reads.

Mr. Blyden is still the chairman of the Senate Committee on Housing, Transportation, Infrastructure, and Telecommunications.

Mr. Potter, who chaired the Committee on Ethical Conduct that investigated the allegations against Mr. Blyden, said, “In summary, the resolution calls for the legislature to suspend Senator Blyden for 160 working hours and divest him of his position as majority leader for his violation of standard ethical conduct.”

“I can say without fear of contradiction that the committee did its job which was to investigate the complaint objectively, consider the evidence and make recommendations to the full body for their consideration,” Mr. Potter said while sharing information about the work of the committee.

“We believe our recommendations were reflective of a fair, proportionate sanction given the infraction. It was the job of every member of this body to vote the recommendation up or vote it down or make amendments as they see fit,” Mr. Potter reminded lawmakers who had already approved the resolution.

Speaking before the resolution was voted on, Mr. Blyden declared that he was not in support of the resolution because the charge against him is a falsehood that he is prepared to challenge “to the end of the earth.”

“I have not contested those charges and make it clear from the beginning that I understand that there are consequences for my bad judgment and failure to set a proper example. However, I cannot be silent in a face of falsehood and a charge that I violated an oath of office. It is simply a falsehood that I am prepared to challenge to the end of the earth,” he said while contending that only the Legislature may determine what actions it considers to be unbecoming conduct and disgraceful to the Legislature.

The Consortium reported exclusively on Monday, Sept. 20 that Mr. Blyden had flouted Dept. of Health Covid-19 protocols when he went to an event with scores of people in attendance two days after testing positive for Covid-19. Mr. Blyden said he was first tested at the Legislature on Tues., Sept. 14 and refused to believe he was positive, so he sought another test at the V.I. Dept. of Health, which also returned positive Wednesday, Sept. 15. The senator said he was advised by D.O.H. to quarantine for 10 days. However, instead of following the health department’s protocols, Mr. Blyden said he tested at home several times after and those tests came back negative. That prompted the senator to attend a function at Tillet Gardens using a government-owned, Legislature-issued, LEG 5 vehicle on the night of Saturday, Sept. 18.

The senator has since acknowledged in part his wrongdoing and profusely apologized to the public when the matter became public. Mr. Blyden said he had a “terrible lapse of judgement for failing to set an example as a community leader” when he attended the function at Tillet Gardens after testing positive for Covid-19.

But in the same release, Mr. Blyden sought to remove himself from possible punishment under V.I. law, contending that he would never knowingly expose others to Covid-19.

A V.I. Dept. of Justice-led case against the senator has been set for April after a judge found probable cause to charge Mr. Blyden with exposure in public place while infected with a contagious disease.

“As a legislative body, using words accurately is very important, there is a difference between a guideline, a protocol, or an order. The CDC simply provides guidelines that jurisdictions can utilize in shaping their own policies. There is no CDC protocol or order in effect as it applies to quarantine and isolation, vaccines or mask-wearing. In fact, the CDC has not issued general isolation or quarantine orders to the United States since the flu pandemic of 1918,” the senator argued.

“Therefore, I cannot possibly have violated a CDC quarantine or isolating protocol because there are none…I ask the committee or anyone else in this body to produce a copy of the Department of Health protocol or the order that I am alleged to have violated,” he said while challenging anyone to find or cite the provision of the legislative Covid-19 protocol that he violated.

Even as Mr. Blyden contended that there were not Centers for Disease Control and Prevention or V.I. Dept. of Health Covid-19 protocols, he went on to say that senators had violated Covid-19 protocols “in this body,” suggesting he was referring to the 34th Legislature’s Covid-19 rules. “Yet persons who have actually violated the Covid-19 protocol in this body remain unsanctioned and unpunished,” he said.

All the V.I. Dept. of Health Covid-19 guidance for everything from individuals to households, to event planners, bars and nightclubs, employers and office buildings among several other categories are here. Guidance specific to individuals are here. CDC has wide latitude to institute rules aimed at protecting health based on a number of U.S. laws. The specific laws and regulations governing the control of communicable diseases falling under CDC jurisdiction are here.

Guidance specific to an individual with an active Covid-19 infection is here.

The Committee on Ethical Conducted charged Mr. Blyden with breaking the Legislature’s rules for decorum and ethical conduct, as well as with violating the oath of office, in which elected officials swear to uphold the Constitution and the laws of the Virgin Islands. See the charging document here.

Mr. Blyden said Thursday, “Relative to the charge of violation of the oath of office, the resolution states that I violated several provisions of appliable law but it fails to quote or cite a single one of these that it charged me with violating. How can such a resolution be based on fact when it repeatedly fails to provide the most basic fact, the resolution simple begs to be carried before a court,” he told the Senate members.

“I must caution, there is simply no factual basis for this claim that I violated Virgin Islands law or violated an Oath of Office…Disciplinary action must not be arbitrary or captious and must be based on facts not on emotions. If a constituent asks you to cite any law that Marvin Blyden violated what are you going to tell them,” he said.

“I believe that when a Judge asks the same question how you will answer them, I ask you to consider these questions carefully rather than have to struggle to answer them in the future. I have not chosen to contest the charges that my conduct was unbecoming, that I brought discredit to the Legislature, and I will accept them without complain or contest, I have said so from the beginning,” he reminded senators.

“When it comes to consequences for my behavior, I will not stand by idly and silently in the face of false charges backed by not a shred, not a shred of evidence and facts and I will not, will not be silent in the face of selective and arbitrary justice,” said Mr. Blyden.

Twelve senators voted in favor of the resolution, with Senators Javan James Sr. and Steven Payne absent. Mr. Blyden voted against the resolution.