Bonner Bats all Day, Scores Superb 113 not Out to Earn Draw for West Indies 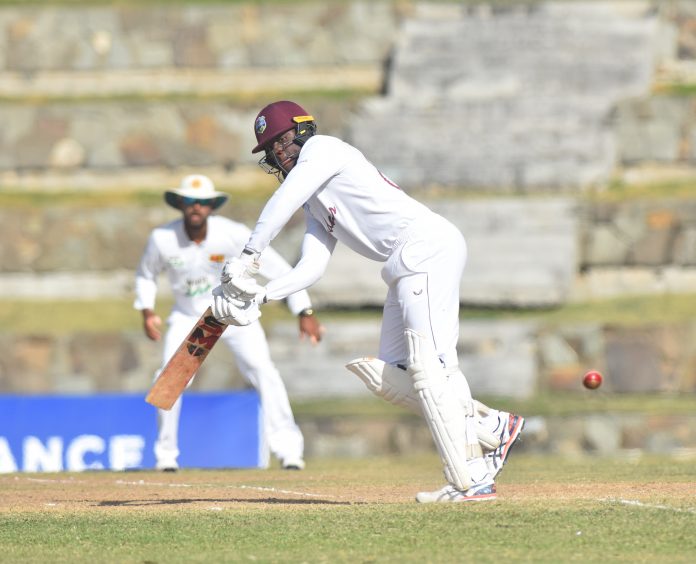 St John’s, Antigua – Nkrumah Bonner produced a high-quality maiden Test century to guide West Indies to a hard-fought draw on the final day of the first match of the Sandals Test Series on Thursday.

Resuming the day on 34-1 after being set a victory target of 375, West Indies batted all day on a placid surface at the Sir Vivian Richards Stadium. Bonner ended 113 not out – another demonstration of his skills and discipline since the start of his Test career last month in Bangladesh. He was named the Sandals Player-of-the-Match.

On debut in Chattogram he made 17 and 86 and followed up with 90 and 38 in the second match in Dhaka. Here, he made 31 in the first innings and added today’s century. Overall, he has now made 375 runs at an impressive average of 75 per innings.

Left-hander Kyle Mayers played some classy shots as he made 52 and captain Kraigg Brathwaite worked hard for 23. Both batted well with Bonner to lift West Indies to 236-4 off 100 overs when the two teams decided to call time on an enthralling Test contest.

Starting the day on 15, Bonner faced 274 balls in seven hours at the crease, and struck 13 fours and a six. He extended his overnight second wicket stand with Brathwaite to 66. He then added an invaluable 105 for the third wicket with Mayers, and then an unbroken fifth-wicket partnership of 32 with Jason Holder (18 not out).

“This is truly special for me. This is my childhood dream and I am really happy I got this monkey off my back,” Bonner said on the Sandals Player Zone. “When I was on 99 I didn’t panic. I was seeing the ball well and I remained watchful. Jason came down and said ‘just keep doing what you have been doing all day’. It was great to have him at the other end to reassure me. It felt great.”

Bonner added: “Obviously the team had a game plan. From the evening before, we had discussions and basically the coach and the team said we wanted to take it ball by ball, and bat for the people who support West Indies cricket.

“Test cricket is hard, hard work, it examines everything about your game… your fitness, your skills, your technique… you have to be mentally very strong. Sri Lanka have a good attack with lots of variety so there is no time to relax.”

The second Sandals Test match will be played at the same venue starting on Monday. First ball daily is 10 am (9 am Jamaica Time).