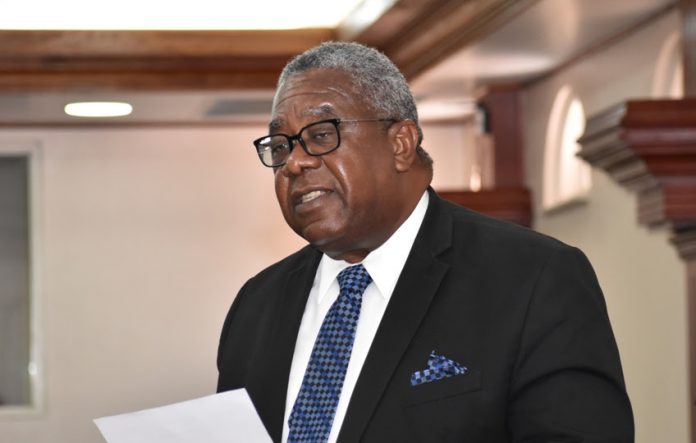 St. Kitts and Nevis (WINN): Constituency boundaries have long been a matter of national interest and Attorney-General the Hon. Vincent Byron Jr. declared that an independent, constitutional Boundaries Commission has been established.

Byron recalled the Sitting of the National Assembly Budget 2022 Debate in December, where he announced that the framework was already in place for a National Boundaries Commission and was submitted to and approved by Governor-General, Sir S.W. Tapley Seaton.

According to Byron, acting upon advice from the Prime Minister Dr Timothy Harris and with consultation from the Leader of the Opposition the Hon. Dr Denzel Douglas, the Governor-General has appointed James Bucchanan – a licensed Land Surveyor to be the Chairman of the St. Kitts and Nevis Boundaries Commission. He also disclosed that the Deputy Prime Minister – the Hon. Shawn Richards and the Representative of Constituency #3 the Hon Akilah Byron-Nisbett were nominated by Prime Minister Harris to serve on the Boundaries Commission. Leader of the Opposition, Dr Denzil Douglas nominated himself, as well as the Representative for Constituency 1 the Hon Dr Geoffery Hanley to be a part of the Commission.

During the Prime Minister’s Press Conference on Thursday, January 10, Byron gave an overview of the mandates that are expected to be carried out by the Boundaries Commission.

“This Commission has two mandates. 1 – To see if there’s a need to do any changes to the current boundaries. First in the terms of the numbers of individuals per constituency, or for that matter, to see if there’s a need to increase the number of constituencies in St. Kitts and in Nevis; and this mandate is governed by a schedule of regulations to be found in the Constitution that says that the constituencies in St. Kitts should be near equal, as near equal in the number of inhabitants, not voters, but inhabitants, so that if you live in a particular Constituency, the numbers [that the] representatives have responsibility for should be near equal to then number of inhabitants to those in another Constituency, in St. Kitts.”

The Attorney-General further explained that it will be a similar approach for Nevis, but it does not mean equal across the board. There is a distinction that the population of St. Kitts is larger than that in Nevis and that distinction, he said, is important and will have to be closely examined.

According to Byron, the second mandate will increase the number of seats in St. Kitts and Nevis; whereas the numbers in Nevis must reflect one-third of the number of Constituencies of the overall number of the Federation.

“Currently, you’ll be aware that in St. Kitts we have eight Constituencies and in Nevis three Constituencies. If there was to be an increase in the number of Constituents in St. Kitts, Nevis must have one-third of the total number; So if you wanted to put it up to nine, that’s a quarter. If it went to ten in St. Kitts, it now requires Nevis to have two more seats, so that is something that has to be aware of.”

The Attorney-General said the Boundaries Commission will meet shortly and is expected to produce a report, which will then be submitted to the Governor-General. Based on the report, Prime Minister Harris should make a resolution, to be submitted to the Parliament. If and when the resolutions are voted upon in a positive manner, this will create new electoral boundaries in St. Kitts and Nevis.