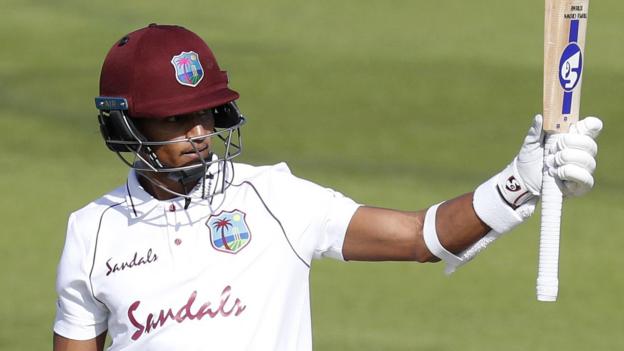 GROS ISLET, St Lucia (CMC) — Kraigg Brathwaite has defended changes to the West Indies side in the wake of their heavy drubbing at the hands of South Africa, arguing they had no impact on the home side’s abject performance in the two-Test series.

West Indies have not won a single Test since a severely weakened side thrashed Bangladesh last February, to come away with a 2-0 series victory.

Since then, they drew both Tests in March on Sri Lanka’s tour of the Caribbean and then suffered heavy defeats to South Africa.

“I don’t think it makes a difference. We have a quality group of boys — a group of 15 or 20,” Brathwaite said Monday.

“So whatever XI we put on the field I know can do a good job, but obviously we didn’t do that this series as a batting group.”

He added: “Part of the plan obviously was to bat better and have consistent partnerships and big partnerships in between and we didn’t have any.”

“We didn’t do well as batsmen, we didn’t do the job. We let ourselves down, we let the team down and we let down the people [of the region] and the fans. We have to come back better and make the fans proud.”

West Indies went down by innings and 63 runs in the opening Test which lasted a mere 2-½ days at the Daren Sammy National Stadium, and fared little better in the second Test at the same venue, losing by 158 runs inside four days here Monday.

From the side that beat Bangladesh by 17 runs in the second Test, West Indies have since made six changes.

Gone are batsmen John Campbell, Shayne Moseley, spinners Rahkeem Cornwall and Jomel Warrican, along with Alzarri Joseph — all dropped — while batsman Nkrumah Bonner has been sidelined due to concussion.

Brathwaite, who led the successful West Indies side on the tour of Bangladesh, said the contrasting series results this year had provided important learning curves, especially for the batting group.

“I think in the three series thus far we have learnt a lot. Obviously we won one, drew one and lost one, up to this stage,” Brathwaite pointed out.

“I think it is very important that we learn from this series. Obviously the main thing is really the batting and we as a team, we know where we fell short.

“We were magnificent in the field, from taking catches to the bowling unit but the batting let ourselves down. Obviously we can look at different dismissals as batsmen and I think we have to learn from them, that’s the key.

“You can’t win all but you still want to be showing fight and determination as batters, which we didn’t. It’s still a learning process, Obviously [there are] still a number of young guys, some guys now coming back in. I wouldn’t use that as an excuse but we’ve got to come better.”

Brathwaite had a poor series, managing 28 runs from four innings, and was part of several dismal opening partnerships. He put on 24 with Shai Hope and 12 with Kieran Powell in the first Test, and nought and 16 with Powell in the second Test.

He conceded the lack of a substantive opening partnership had put pressure on the batting.

“Opening the batting is not easy but it’s a very crucial job because it basically sets up the game to make it easier for the guys that follow and we didn’t do that, and that put us on the back foot most of the time,” the Barbadian explained.

“There are a few technical [things] from my perspective I will work on but it’s just to get into that mental [framework]. You have to be really mentally strong, especially fielding for long periods and then going out late evenings.

“That’s the type of stuff we probably have to get mentally tougher [at] if we could. But the opening partnerships weren’t good at all and that hurt us as a batting unit for sure.”