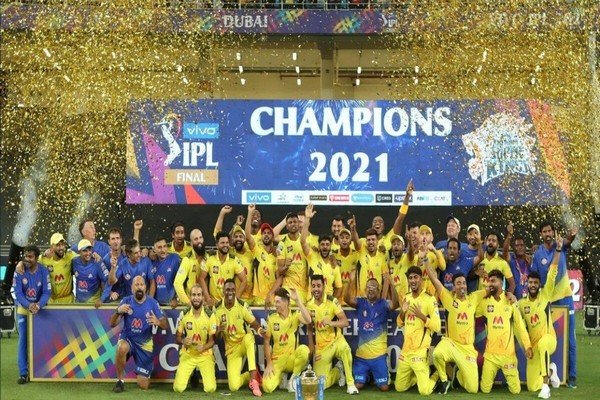 Bravo lifted the Caribbean Premier League title as captain of first-time champions St Kitts & Nevis Patriots on September 15, and though he did not lead CSK, he played a minor role in their 27-run win over KKR that included compatriot Sunil Narine, to take the title.

Narine took 2-26 from four overs, but CSK posted 192 for three from their 20 overs on the back of 86 from former South Africa Captain Faf du Plessis and solid batting from the rest of the new champions’ top order.

Shubman Gill then led the way with 51 and fellow opener Venkatesh Iyer made 50, and they gave KKR hope that they could chase down their target, but their middle-order batting caved in under disciplined bowling from CSK and they fell short.

Comfortable placed at 88 without loss at the halfway stage, KKR slumped to 125 for eight in the 17th over to kiss their chances of a third title goodbye with Bravo taking the final wicket to fall with the penultimate ball of the match and ended with 1-29 from four overs.

Gill creamed a four on the first legitimate ball of the chase, and Iyer then enjoyed a stroke of luck, when CSK Captain Mahendra Singh Dhoni failed to hold onto a chance off Australian Josh Hazlewood in the second over.

Iyer then took the attack to the CSK bowlers, hitting three fours and a six by the end of the fourth over, and the KKR openers continued their impressive run of form, powering their team to 55 without loss after six overs.

Iyer completed his fourth half-century of the season in an expensive 10th over from left-arm spinner Ravindra Jadeja, but three wickets in quick succession changed the course of the match.

Shardul Thakur dismissed Venkatesh Iyer and Nitish Rana in the 11th over, and Hazlewood got Narine out next over, as KKR slumped to 97 for three.

Gill brought up his half-century in the 13th over before Deepak Chahar trapped him lbw in the 14th over and Jadeja followed up with a double wicket over, dismissing Dinesh Karthik and world-rated Bangladesh left-arm spin bowling all-rounder Shakib Al Hasan cheaply.

KKR’s chase was in ruins on 120 for six, and Shardul added to the pain when he removed Rahul Tripathi for two to claim his third wicket in the 16th over and Hazlewood slammed the door shut with the scalp of KKR and England Captain Eoin Morgan for four in the 17th over.

Though Shivam Mavi got 20 and Lockie Ferguson, 18 not out, added 39 for the ninth wicket for KKR, it was too little too late as CSK went on to seal a fine win.

Earlier, Shakib and Shivam kept things tight in the first two overs and were almost rewarded with the wicket of du Plessis in the third over, but ‘keeper Karthik could not collect the ball cleanly, and the former SA skipper got a life.

Du Plessis and Ruturaj Gaikwad completed another half-century opening stand on the final ball of the powerplay. But Narine gave KKR the breakthrough in the ninth over, when Gaikwad was caught at long-off for 32.

Du Plessis and Robin Uthappa went after Shakib in the 10th over, hitting a six each, as CSK reached 80 for one at the halfway stage, and the two continued merrily to complete another half-century stand in only 25 balls.

Du Plessis, who was playing his 100th IPL game, brought up his 22nd IPL half-century before Narine trapped Uthappa lbw for 31 in the 14th over.

England international Moeen Ali joined du Plessis and the pair saw things through to the end with the third successive half-century stand of the innings.

But du Plessis was caught at long-on off Shivam on the final ball of the innings and Moeen finished wih 37 not out off 20 balls, as the CSK pair added 61 in the last five overs.