Britons rush to get shots in booster blitz against omicron 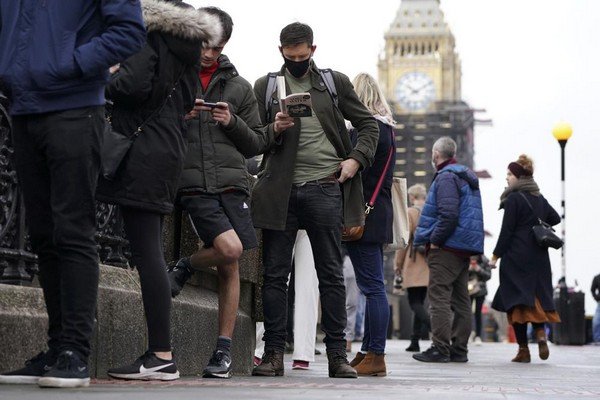 LONDON (AP) — Long lines formed Monday at vaccination centers across England as people heeded the government’s call for all adults to get booster shots to protect themselves against the omicron variant, as the U.K. recorded its first death of a patient infected with omicron.

In a televised announcement late Sunday, Prime Minister Boris Johnson said everyone 18 and up would be offered a third vaccine dose by Dec. 31 — less than three weeks away, and a month earlier than the previous target.

Johnson said said boosters would “reinforce our wall of vaccine protection” against an anticipated “tidal wave of omicron.” The British government raised the country’s official coronavirus threat level on Sunday, warning that the rapid spread of omicron “adds additional and rapidly increasing risk to the public and health care services.”

U.K. health authorities say omicron cases are doubling every two to three days in Britain, and it will replace delta as the dominant coronavirus strain within days. But it’s unclear whether the expected wave of infections will inundate the country’s state-funded health care system.

Scientists in South Africa, where omicron was first identified, say they see signs the variant may cause less severe disease than delta but caution that it’s too soon to be certain. Health authorities around the world are watching Britain closely to see what an omicron surge looks like in a country with an older, more highly vaccinated population than South Africa’s.

About 10 people are in U.K. hospitals with COVID-19 caused by omicron, and Johnson on Monday said the country’s first COVID-19 death involving the variant had been confirmed.

“So I think the idea that this is somehow a milder version of the virus, I think that’s something we need to set on one side and just recognize the sheer pace at which it accelerates through the population,” Johnson said as he visited a vaccination center in London. “So the best thing we can do is all get our boosters.”

The U.K. Health Security Agency says existing vaccines appear less effective in preventing symptomatic infections in people exposed to omicron, though effectiveness appears to rise to between 70% and 75% after a third dose.

More than 80% of people age 12 and up in Britain have received two vaccine doses, and 40% of adults have had three. Giving the rest boosters by the end of the month will be a huge challenge, requiring almost 1 million vaccine shots delivered a day. Johnson acknowledged that many routine medical procedures would have to be postponed to meet the goal.

Some 750 soldiers and thousands of volunteer vaccinators will help give the jabs at doctors’ offices, hospitals, pharmacies and pop-up vaccination centers.

While the online appointment booking system will not be open to under-30s until Wednesday, Johnson said any adult could show up at a walk-in center to get a booster starting Monday.

Lines built up at big London vaccination clinics on Monday morning. The line for shots at St. Thomas’ Hospital, on the south bank of the River Thames in London, stretched across Westminster Bridge toward Parliament. At many clinics people queued patiently despite being told they faced a wait of several hours.

The government’s appointment-booking website struggled to keep up with demand, and also ran out of rapid at-home virus test kits, which have been distributed free to households during the pandemic. The website where tests can be ordered said none were available Monday. Starting Wednesday, people in England must show proof of vaccination or a negative test to enter nightclubs and other crowded venues.

Johnson’s Dec. 31 target applies to England. The other parts of the U.K. — Scotland, Wales and Northern Ireland — are also expected to speed up their vaccination campaigns.

While omicron is spreading around the world, Britain may be especially affected because it ordinarily has high levels of travel to South Africa. The omicron outbreak is also more visible because U.K. is also a world leader in genomic sequencing, the technique used to identify and track new variants.

Researchers in the U.K. have sequenced about 13.3% of all positive cases, compared with 3.8% in the U.S., according to GISAID, which promotes rapid sharing of data on COVID-19 and the flu. While nations such as Iceland and Denmark have sequenced a greater percentage of their positive cases, the size of the U.K.’s population and the scope of its outbreak mean Britain has sequenced many more cases.

This surveillance provided a key piece of the evidence that Johnson and the nation’s chief medical officers used in deciding to tighten pandemic restrictions and ramp up the U.K.’s vaccination program.

Johnson’s Conservative government is bringing in vaccine certificates for nightclubs and reintroducing restrictions that were lifted almost six months ago. Masks must once again be worn in most indoor settings and as of Monday, people were urged to work from home if possible.

Many scientists say those measures are unlikely to be enough and are calling for tougher ones. But cafes, pubs and shops in city centers fear that plummeting commuter numbers will hammer business in the usually busy pre-Christmas period.

Johnson is facing a major rebellion from unhappy Conservative lawmakers when Parliament votes on the new virus restrictions Tuesday. Dozens are expected to oppose the restrictions — especially vaccine passports, which they say are unfair and economically damaging.

The measures are still highly likely to pass, with support from the opposition Labour Party.

Robert Read, professor of infectious diseases at the University of Southampton, said it was still unclear how severe cases of COVID-19 from omicron would be, but “the evidence is that omicron probably requires much larger amounts of antibody in the blood in order to thwart the virus as much as possible.”

“We need to get those third doses into as many adults as we possibly can, just in case this virus turns out to be a raging bull rather than a pussy cat,” Read told radio station LBC.