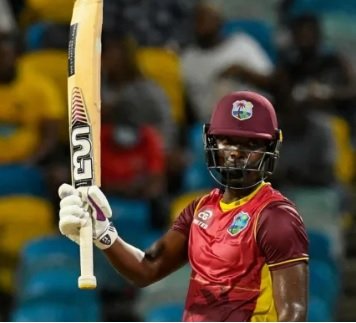 (ESPNcricinfo) – Shamarh Brooks scored 79 and shared a 75-run partnership with captain Nicholas Pooran which guided the West Indies to a five-wicket win over top-ranked New Zealand on Wednesday in the series-opening ODI in Barbados.

Brooks reached his fourth ODI half century from 58 balls and had faced 91 deliveries when he was out in the 34th over with the West Indies closing on New Zealand’s inadequate total of 190.

Jason Holder and Jermaine Blackwood were at the crease when the home team reached its target with 11 overs to spare.

Earlier, Akeal Hosein took 3 for 28 and Alzarri Joseph returned 3 for 36 as West Indies bowled out New Zealand in 45.2 overs after choosing to field.

It was the first time New Zealand has been dismissed in an ODI since March 2020.