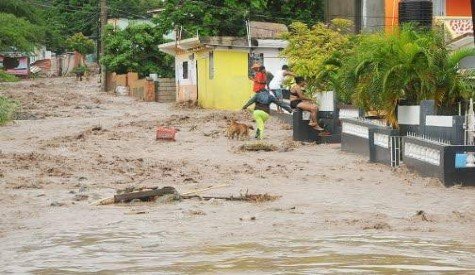 (Jamaica Observer) Distraught residents of Nine Miles, Bull Bay, in St Andrew, are blaming yesterday’s widespread flooding of several houses in the community on substandard desilting work being done by men in the channels of the Chalky River.

Tropical Storm Eta, which formed in the central Caribbean last week, unleashed heavy showers on the island, triggering landslides in several communities and bringing severe flooding to others.

Residents who spoke to the Jamaica Observer yesterday said desilting work, which began approximately six days ago, was left incomplete, providing a channel into the community for raging waters from Chalky River.

“They burst one part of the banking and leave it, and now mek all of the people dem a Weise Road a suffer. Every house down a the bottom flood out; when mi tell yuh seh flood out, mi mean flood out! Yuh have all doctor live down there and her house flood right out. A dem come wid excavator come dig off the place and leave it. Forty-six years mi deh here and not even [Hurricane] Gilbert cause this,” a woman who gave her name as Nadine told the Observer yesterday.