Business and Professional Women Conference ends with gala; PM drew suggests women’s advancement is on the rise in SKN 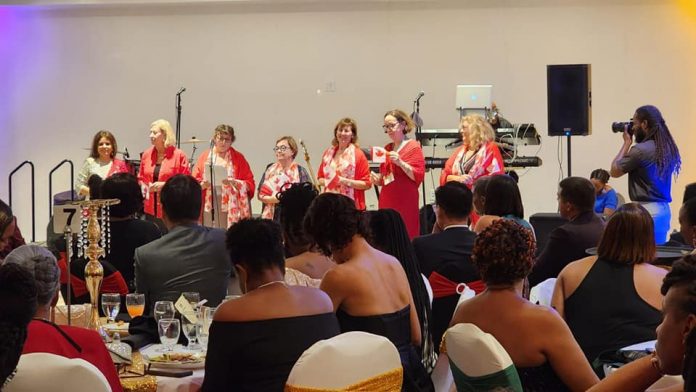 St. Kitts and Nevis (WINN): Women from around the region gathered together on Saturday night, January 14 2023, at the St. Kitts Marriott Resort for the Business and Professional Women- North America and the Caribbean Regional Conference Gala.

The gala was the final activity for the Conference, which took place from January 08 to 15, 2023, under the theme “Business and Professional Women; Moving Forward Together- Stronger.”

History was also created, as this was the first time that the Business and Professional Women- North America and the Caribbean Conference was held in St. Kitts or anywhere in the Eastern Caribbean.

The Conference brought women together in one space to share and discuss topics designed to build organisational knowledge and participation and, more so, to achieve their professional goals.

The highlights of the Conference included but were not limited to the Young Business and Professional Women meeting and Breakfast, President’s Meeting, Welcome Cocktails, Leaders Summit, Island Tour and General Assembly Sessions.

On Friday, January 13, several topics were discussed during the General Assembly Sessions:

The Post-Covid Economy- What Can We Expect?
Business and Professional Women- The Way Forward
Building Partnerships- United Nations Women
Growing through increased membership- Recruitment and Retention Adding Value through collaborations and networking

The General Assembly Sessions on Saturday, January 14, consisted of a Panel Discussion featuring Successful Stories by Successful Women; there was also a presentation by a guest speaker- who focused on Empowering women for the future through Financial Leadership, followed by Table Talks to discuss Regional Reports and Critical Issues.

Prime Minister of St.Kitts and Nevis, Hon. Dr Terrance Drew applauded the efforts of the Business and Professional Women North America and the Caribbean Registration Secretariat and its Regional Coordinator- Miss Dawne E. Williams, who continue to promote women’s business and professional and leadership potential through various means, such as advocacy, mentoring, networking, education, capacity building and economic empowerment programs around the world.

Drew expressed that women typically excel at the soft skills needed for business leadership, thus sharing that it is critically important for more women to get involved in decision-making processes not just on a corporate level but also in government.
There has been a growing involvement of Women in politics in the Federation of St. Kitts and Nevis recently, clearly seen during the National Assembly Elections of August 2022, where four females vied for public office. The Nevis Island Assembly Elections of December 2022 also saw equal split involvement of candidates; five females to five males.

Prime Minister Drew deems himself an advocate for gender parity and expressed his honour of being a part of a parliament that exemplifies the meaning of gender equity.

About 47 percent of women currently make up the House of Representatives. For the first time in history, both the Speaker and Deputy Speaker of the National Assembly- Miss Lanien Blanchette and Miss Latoya Jones, respectively, are women. Additionally, we have the elected Member for No. 2, Hon. Marsha Henderson and Senators Dr Joyelle Clarke and Hon. Isalean Phillip. The Deputy Governor General is also a female- Miss Marcella Liburd.

In Nevis, three women will serve as Members of Parliament for the next five-year term, Senator Jahnel Nisbett, Leader of the Opposition, Hon. Dr. Janice Daniel Hodge, as well as Hon. Cleone Stapleton Simmonds.

The advancement of women in the country is also recognised through the appointment of women in several leadership roles, be it on Statutory Boards and in the Civil Service.