Busy schedule of events and educational opportunities on the horizon for St. Kitts Yacht Club 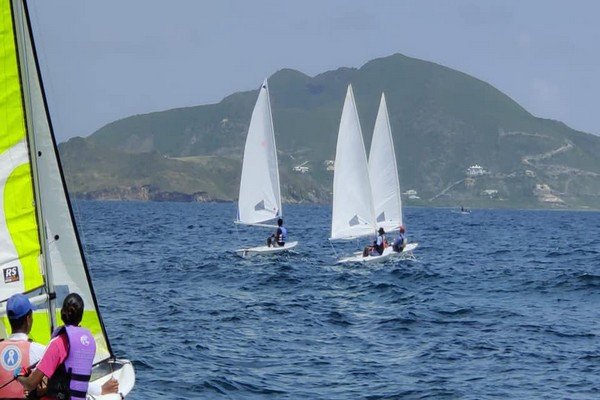 What is the St. Kitts Yacht Club doing for the rest of the year?

The club will restart their sailing and swimming classes every Saturday from 2-5 p.m.

“As we just concluded the summer camp activities, we’re going to restart the Saturday afternoon. So we’re going to do a big push on that. Other things we have coming up are on the 11th of September, there’s this event called the Bart’s Bash, where a sailor died during the America’s Cup, and now there’s a big worldwide fundraiser, where basically every club does their own race… wherever they are… Normally we would try to go to Antigua for the Caribbean Dinghy Championship. And this year, the Caribbean Dinghy Championship chose this Bart’s Bash… to compete within the Caribbean by doing our own regattas and recording our own times and submitting them… On the 9th of October, we have women’s sailing day to try to focus on encouraging and supporting women getting into the sport of sailing,” shared Nicholas Dupre, Commodore/President of the St. Kitts Yacht Club, during the August 31 broadcast of Island Tea hosted by Azem Bailey.

“Later on in the year, on the 14th of November, we have the Booby Island Regatta. So this is where we get to that was more in the big boats, what we call keelboats… as we don’t really have that many of those in St Kitts and Nevis… It’s also open to Hobie cats… we also try to encourage kiteboarders to come out and ways. So it’s going to be kiteboarders, yachts, and Hobie cats… we have the peninsula swim on 20th November from Whitehouse Bay down to Friars bay, which is 1.9 miles and then at Shipwreck… And then in Christmas, we’re going to have another regatta, and we’re going to have the Splash Floatilla, so we have a sailing race on a Saturday and on a Sunday it’s just a day for anybody with any boat, just come together.”

Nickhail Rogers, the Secretary of the Yacht Club said these classes and sailing opportunity is a great way to address fears of the water and take advantage of an environment we live with as small islands in the Caribbean sea.

“When you get underwater on a Hobie or any yard, for instance, the fears basically start to dwindle and dissolve away, and you start to see the opportunity that the ocean and sailing bring to anyone, especially us who live literally an island surrounded by water that you could drive 30 minutes to get anywhere. We’re not limited by the land because the water is an extension of our transportation. And that’s something that I don’t think we see here on St. Kitts and Nevis as much.”

Instead of relying on flight travel to get around, especially in the Caribbean, more people versed in sailing could open up opportunities for a different personal transport sector, especially during this COVID-19 era when airports and their protocols are seen as a hassle.

“Just imagine summer vacation comes about, and instead of jumping on LIAT to go to Martinique… for your summer vacation, you just charter a yacht and sail down there with your family, and you sleep on the yacht,” said Rogers.

“And the other thing is you don’t realise all these things that you are learning, and a lot of the skill sets that we are learning could lead you to employment prospects to, there’s a lot of opportunities on the catamaran or with Christoph Harbour, where you could eventually get yourself a job on a bit yacht. I mean, we just had the Below Deck people who came here. Imagine if you got a job as a crew on one of those boats, not saying that that would be the ideal boat job, but there’s lots of opportunities,” shared Dupre.