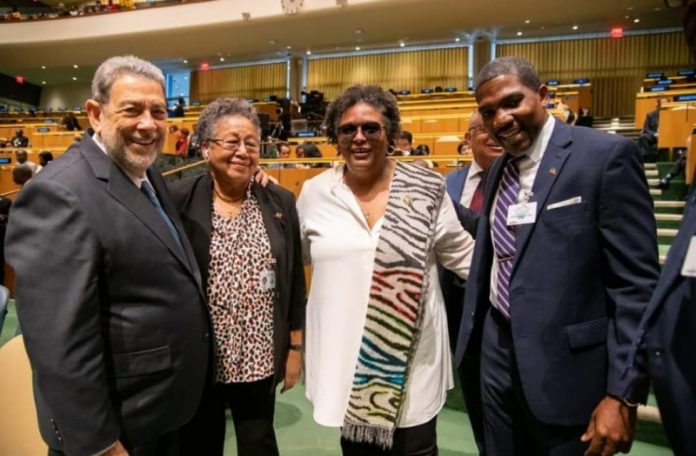 St. Kitts and Nevis (WINN) – Leaders from around the world have been voicing their concerns about the state of the global socioeconomic and political affairs, from the wars in Ukraine, Syria, Yemen and part of Africa to supply-chain issues and the continued impact of the COVID-19 pandemic at the 77th Session of the General Assembly of the United Nations for the past week (20 – 26 September 2022).

The 77th UNGA is being held under the theme, ‘A Watershed Moment: Transformative Solutions to Interlocking Challenges.’

Caribbean leaders, including Prime Minister Mia Mottley, out of Barbados, raised concerns over Climate Change and its effects. Not just the infrastructural effects but also the economic impact on countries and territories whose Greenhouse Gas Emissions are negligible.

Mottley also indicated that the World Bank and the International Monetary Fund (IMF) “no longer serve the purpose in the 21st century that they served in the 20th century.”

Prime Ministers Gaston Browne of Antigua and Barbuda, Dr Ralph Gonsalves of St Vincent and the Grenadines and St. Lucia’s Philip J. Pierre also voiced concern over the ongoing wars and their effects on Small Island Developing States and expressed their condemnation of the ongoing embargoes on Cuba and Venezuela.

St. Lucia’s Prime Minister said, “In the interest of peace and stability in the contemporary global political environment, we continue to call for the reduction of tension and the organisation of relations with our regional neighbours of Venezuela and Cuba. And in this regard, Mr President, in keeping with the Charter of the United Nations on people’s right to self-determination and political independence, we once again call for the immediate removal of the inhumane economic embargo against Cuba. Given the devastating impact of the sanctions on the Venezuelan people coupled with the COVID-19 pandemic and compounded by the expanding crisis of the whole economy arising out of the war in Ukraine, let us also use this moment as a watershed for lifting the painful sanctions against the people of Venezuela.”

Prime Minister and Minister for Finance, National Security and Immigration, Health, and Social Security of Saint Kitts and Nevis, Hon. Dr Terrance Micheal Drew gave his first address at the general debate of the 77th Session of the General Assembly of the United Nations on September 23.

Prime Minister Drew reminded the General Assembly that no nation can defend itself against all threats to development alone, and the challenges countries face are global and demand a global response through the words of the seventh Secretary-General, His Excellency Kofi Annan.

“We must therefore use this 77th General Assembly – not merely for political posturing – but for resolute recommitment to multilateral cooperation. For Small Island Developing States, and indeed vulnerable peoples everywhere, there can be no international security without climate security. This requires collective fidelity to multilateral action for our very survival.

I am ready, and I am sure that all of us are eager to build a better world through multilateral action and uphold, with all our will and might, this sacred tenet of the United Nations. Even as geopolitics and great power competition [are] exacerbating conflict and the climate catastrophe, we must face the hard truth that only through multilateralism will we force the global trajectory toward global peace, prosperity and sustainability.”

Another point of importance in Dr Drew’s address was education and the need to invest in social empowerment programs to build resilience in people and the economy through education, referencing the Transforming Education Summit held earlier.

“St. Kitts and Nevis reaffirms that access to quality education is a human right and the foundation of sustainable development and thriving societies. We welcome the Transforming Education Summit that was held earlier this week, and I am happy to report that our government has committed to entering a new pact, A New Deal on Education as it were, that will reform, transform and re-invigorate our education system based on equality, access and inclusion. In fact, just a few weeks ago, my government made a decision to introduce free tertiary education to ensure that all people can have equal access regardless of their socio-economic status.

Other goals for educational reforms include, but are not limited to”

Dr Drew closed by complimenting the theme of the General assembly, saying, “The theme for this year’s General Assembly was well chosen. The idea of “watershed” speaks to significant and transformational change. The challenges faced by the countries of the world and their people are indeed interlocking, and we must resolve them together. The issue for us is how we will bring that change about  for those who most need it.”

Listen to Dr Drew’s inaugural address at the 77th Session of the General Assembly of the United Nations here:

WhatsApp
Facebook
Twitter
Linkedin
Email
Print
Previous articleAntigua to follow up on bilateral commitments to support St Kitts in its accreditation bid for Climate Finance and its move to address plastic pollution
Next article‘Fighting fit’: Trial to show Oath Keepers’ road to Jan. 6