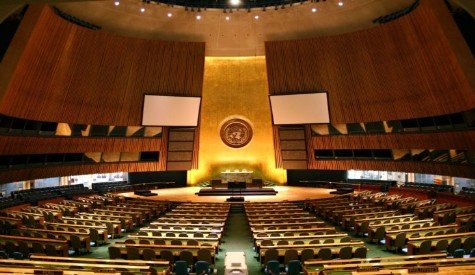 Eight Caribbean Community (CARICOM) leaders will speak during Monday’s High-Level Meeting, marking the 75th anniversary of the establishment of the United Nations.

According to the UN’s list of provisional speakers, the prime ministers of Barbados, the Bahamas, St. Lucia, St. Vincent and the Grenadines, Trinidad and Tobago, and Antigua and Barbuda will speak during the meeting.

Guyana’s newly-installed President Dr. Mohamed Irfaan Ali will also deliver his maiden address to the UNGA, but he will do so on behalf of the Group of 77 and China.

Beginning on Wednesday, CARICOM leaders and foreign ministers will participate in the UNGA debate, which culminates on Tuesday, September 29.

The UN said that the leaders of Suriname and Guyana will take part in the debate on Wednesday; Dominica and Haiti on Thursday; Barbados and Antigua and Barbuda on Friday; Grenada, Jamaica, St. Vincent and the Grenadines, St. Kitts and Nevis, St. Lucia, Trinidad and Tobago, and the Bahamas on Saturday; and Belize next Tuesday.

The UN General Assembly said its 75th Session, which began on September 15, will be unlike any other in the organization’s three quarters of a century of existence, due to the ongoing global coronavirus (COVID-19) pandemic.

“This month, there will be no bumping into presidents or the occasional global celebrity in hectic and sometimes crushed corridors at UN Headquarters in New York,” the UN said.

“There will be no marvelling at seemingly endless presidential motorcades on First Avenue (in New York) and no ‘standing-room only’ moments in the gilded General Assembly Hall, as the organization’s busiest time of the year is reimagined in the time of COVID-19,” it added.

The UN said most leaders will not be appearing in person, and meetings will be conducted virtually.

“But that’s not to say that the wheels of global diplomacy and sustainable development will not be turning at the usual speed,” it said, adding that the centerpiece of any new General Assembly is undoubtedly the General Debate.

“It’s a globally unique occasion at which presidents and heads of state or sometimes their deputies or foreign ministers, take to the dais, and address a world audience on an issue of their choosing. This year, because of the pandemic, world leaders will be staying away and have been invited to send in pre-recorded videos of their speeches which will be broadcast “as live”.

The UN said speeches are expected to be introduced by a New York-based representative of each state, who will be physically present.

“However, any world leader has the right to turn up in person, to deliver his or her keynote address, an opportunity that at least one president seeking re-election this year, is reported to be mulling over,” the UN said without identifying that president.

The UN said the decision to introduce pre-recorded videos to the High-Level General Debate, which takes place at the beginning of the 75th session of the General Assembly, was made by the UN body, using the novel “silence procedure” method.

Under this method, the UN said draft resolutions are circulated by the President of the General Assembly, which gives member states a deadline of at least 72 hours, to raise objections.

If there are no objections, the president circulates a letter, confirming that the resolution has been adopted, the UN said.

The United Nations was established in 1945 and has been marking its 75th anniversary with what the UN Secretary-General António Guterres has called an extended “people’s debate”, which “promises to be the largest and furthest-reaching global conversation ever on building the future we want.”

The UN said Monday’s event, at UN headquarters, to celebrate the milestone, which will also take place online and remotely, will aim to “generate renewed support for multilateralism.”

“[This is] an issue many believe has become ever more urgent as the world faces up to the COVID-19 pandemic,” the UN said.

It’s expected that the Secretary-General will address, in person, the High-Level event to mark the 75th anniversary in the General Assembly Hall, the UN said.