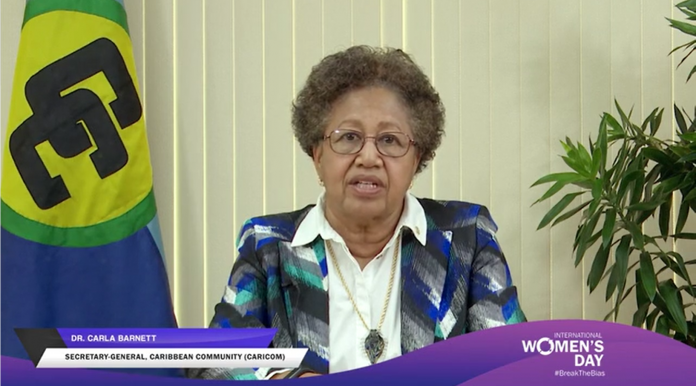 In a message to mark the occasion on Tuesday, Barnett, the first woman to serve as the region’s top public servant, said that it also provides an opportunity to celebrate the important contributions and tireless service that women around the world give every day at home, in their communities and beyond, and in every sphere of life.

“We celebrate their many achievements and recognise the progress that has been made towards gender equality while acknowledging that there is still much more work to be done,” she added.

International Women’s Day is being observed under the theme “Gender Equality Today For A Sustainable Tomorrow,” and Barnett said that it recognises the contribution of women and girls around the world who are leading the charge on climate change adaptation, mitigation and response, to build a more sustainable future for all.

“Achieving gender equality in the context of the climate crisis and disaster risk reduction is one of the urgent global challenges of the 21st century.”

She said climate change will continue to have severe and lasting impacts on the environment, and therefore on the region’s economic and social development.

“The most vulnerable and marginalised among us, including indigenous and rural women, experience the most severe effects,” Barnett said, quoting UN Women as indicating that women constitute 70 per cent of the world’s poor and are more likely to work or live on marginal lands and in informal settlements.

“Further, women’s capacity to cope with the shocks of climate events is further limited by gender inequalities and cultural norms in relation to gender roles, which often restrict women’s decision-making in disaster situations and limit their ability to escape natural disasters.”

Barnett said that female-headed households, estimated to be 40 per cent in the Caribbean region, must be included when developing climate and disaster risk policies, programmes, and projects.

“Overall, women head larger households than men and their livelihoods are more vulnerable to the impact of disasters. They also struggle more than men to find alternative livelihoods and re-enter the formal employment sector. As is the case during the ongoing coronavirus pandemic, disasters disproportionately increase women’s care burden, the incidence of gender-based violence and job losses.”

However, she said, women and girls are effective, powerful leaders and change agents for climate adaptation and mitigation.

“They are involved in environmental sustainability initiatives around the world, and their participation and leadership result in more effective climate action. As a community, we need to continue to increase the opportunities, and minimise the constraints to empowering women and girls to have a voice, and to be equal partners in decision-making on climate action and disaster management

“By advancing gender equality today as a powerful driver of development, and working towards ensuring lives free of violence and poverty, we will secure a sustainable tomorrow and a thriving community for all,” Barnett added.