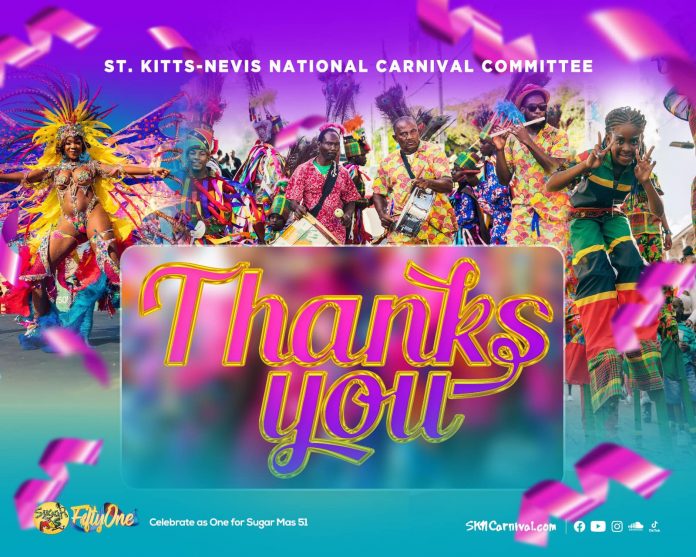 St. Kitts and Nevis (WINN): The St. Kitts and Nevis National Carnival Committee is expressing its gratitude to patrons who came out in their numbers to support the 51st staging of Sugar Mas in St. Kitts, which ran from November 25, 2022, to January 03, 2023.

The Prime Minister, Hon. Dr. Terrance Drew, Minister of the Creative Economy, Hon. Samal Duggins, and Chairperson of the Carnival Committee, Ms. Shannon Hawley, crowned the winners of the various competitions, who all received attractive prizes through the sponsorship of the private and public sectors.

Securing the top spot in the Flow-sponsored Senior Calypso Finals was Queen Independent. Socrates was the first runner-up, Queen Diva was the second runner-up, and Queeny G was the third runner-up. Mr. Bagnall is the 2022–2023 Groovy Soca Monarch with his winning piece, “Can’t Miss It,” and Stadics secured the top spot in the power segment with his winning piece, “De Cowbell”.

There was great steelpan music in Basseterre on Friday, December 16, 2022, with steel bands from across St. Kitts and Nevis competing for the top spot in the Panorama Steelpan Competition. EBJ Harmonics, for the third consecutive time, won the competition performing the song “Nobody Gone Run Me.”

Sugar Mas 51 came to a close this week on Monday and Tuesday with revelers dancing to the music of a number of bands for the Carnival Grand Parade and Last Lap. The Road March title went to Grand Masters, who collaborated with Dejour and produced the ever-popular “Outside Again.” Smallaxe Band took first place with their song “Kick Dem Off De Wall,” and Upset Squad took second place with their song “Cowbell.”

The Carnival Committee, in a statement on Wednesday, thanked all stakeholders who contributed to the successful staging of Sugar Mas 51. “We will see you from December 15th, 2023, to January 2nd, 2024, for Sugar Mas 52,” the statement added.