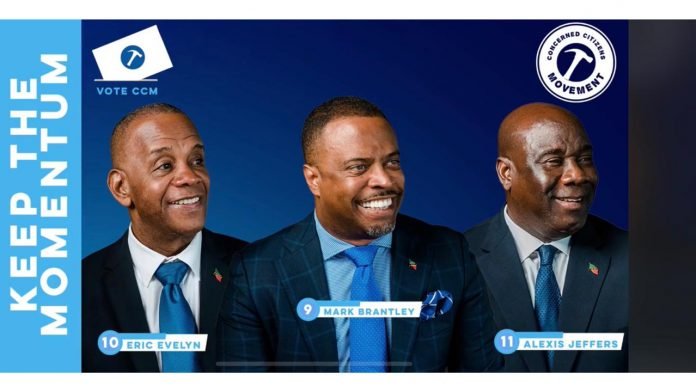 St. Kitts and Nevis (WINN): The Concerned Citizens Movement (CCM) on Saturday, May 21, officially signaled the start of its campaign for the 2022 National Assembly Elections.

Premier of Nevis Mark Brantley who has been the Parliamentary Representative for Nevis 9 since the 2007 by-election will be contesting the seat again on behalf of CCM.

“If CCM keeps its promise and brings the three seats, you [PAM] must bring the seats to the table so we could have real unity in this country again. Unity was not about Timothy Harris, it was not about Shawn Richards or Vance Amory of blessed memory or me, Unity was about you, the people…and nobody can hijack Unity.”

Eric Evelyn will be seeking reelection as the Parliamentary Representative for Nevis 10.

CCM will support the candidacy of Alexis Jeffers to defend the Nevis 11 constituency which he won in the 2020 National Assembly Elections defeating Patrice Nisbett of the Nevis Reformation Party who held the seat for 20 years.

CCM’s Campaign Launch and Rally was held at the Caribbean Cove in Stoney Grove, Nevis, and saw members of the People’s Action Movement in attendance including its leader Shawn Richards.

To date, only CCM and the St. Kitts Nevis Labour Party have officially launched their full slate of candidates for the upcoming elections.