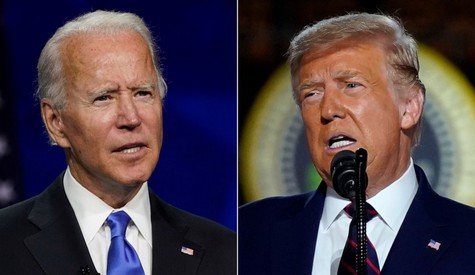 CLEVELAND (AP) — The first debate between President Donald Trump and Democratic challenger Joe Biden deteriorated into bitter taunts and near chaos Tuesday night as Trump repeatedly interrupted his opponent with angry — and personal — jabs that sometimes overshadowed the sharply different visions each man has for a nation facing historic crises.

In the most tumultuous presidential debate in recent memory, Trump refused to condemn white supremacists who have supported him, telling one such group known as Proud Boys to “stand back, stand by.” There were also heated clashes over the president’s handling of the pandemic, the integrity of the election results, deeply personal attacks about Biden’s family and how the Supreme Court will shape the future of the nation’s health care.

But it was the belligerent tone that was persistent, somehow fitting for what has been an extraordinarily ugly campaign. The two men frequently talked over each other with Trump interrupting, nearly shouting, so often that Biden eventually snapped at him, “Will you shut up, man?”

“The fact is that everything he’s saying so far is simply a lie,” Biden said. “I’m not here to call out his lies. Everybody knows he’s a liar.”

The presidential race has been remarkably stable for weeks, despite the historic crises that have battered the country this year, including a pandemic that has killed more than 200,000 Americans and a reckoning over race and police brutality. With just five weeks until Election Day and voting already underway in some key states, Biden has maintained a lead in national polls and in many battlegrounds.