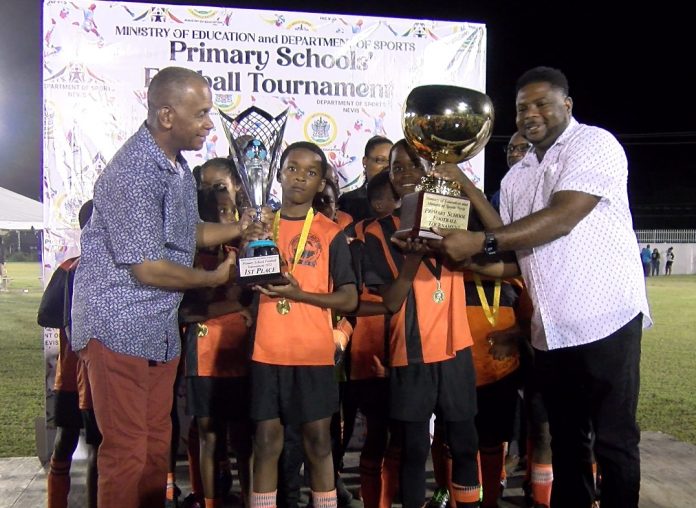 St. Kitts and Nevis (Sports Page) – It is my stated opinion that had the Football fans at Wednesday night’s grand finals in the Primary schools’ football tournament been asked to pay $20.00 per person, after the fact, for the treat that was given to them by the young Footballers on Nevis, absolutely no one would have hesitated.

Such was the level of intensity and skill demonstrated by the youngsters, in the two games played.

The bumper crowd at the ET Willet Park almost replicated what is normally seen at the interprimary school mini-Olympic event.

First up, was the match up to determine the third placers, between the St. Thomas’ Primary School and the Joycelyn Liburd Primary.

The Joycelyn Liburd Primary School commenced the game in scintillating fashion, hitting the back of the net twice, within the first ten minutes of the game.

However, the second half belonged to the St. Thomas’ Primary School, as they not only equalized but put in a telling third goal, to put the matter beyond doubt.

Player of the match-Tayshawn Bolus of St. Thomas’ Primary

By the time the second game, which was the grand finale between the Charlestown Primary School and the St. James’ Primary School, commenced, the ETW was a sea of colours. The support for both teams was vociferous.

Charlestown Primary struck the back of the net first and their support crew went wild.

Then St. James’ Primary equalized, just moments to half time and their support crew was equally frenetic.

An error by the goalkeeper, saw the Charlestown Primary getting a free kick from close range and this was promptly bombed home, by Casheem Taylor.

The minutes were ticking away, but then a sizzler from Justin Williams from long range, was headed straight to goal, when one of the Charlestown defenders tried to head it out and it inadvertently slammed into the back of the net.

The score 2-all at regulation time.

The officials then declared that the match would be determined on penalty kicks.

Charlestown Primary won with a scoreline of 4 goals to St. James’ 3 and then the celebrations began.

Charlestown’s goalie, who had been superlative throughout the game-Nicholas Hero, was adjudged the game’s MVP

The following awards were made:

Special mention was made of Destiny Hussain of the Nevis Academy.

Best young and upcoming footballer-Aiden Walters of the Charlestown Primary

Most Goals for the tournament- Casheem Taylor of the Charlestown Primary, with 8 goals

MVP of the tournament-Casheem Taylor of the Charlestown Primary