After a two year hiatus, due to covid 19, this meet was special and was held in honour of the late pioneer of the event, Mr. Arthur Evelyn.

After an impressive march past, the opening ceremony was ably chaired by the youthful Rajaun Fyfield and featured remarks from Permanent Secretary in the Ministry of Education, Mr. Kevin Barrett, the Gulf Insurance representative and the  Hon. Eric Evelyn.

A poem was beautifully rendered, paying tribute to Mr. Evelyn, by a student of the Charlestown Primary School and the meet was officially signalled into action, by the Hon. Troy Liburd.

Thereafter, the massive crowd remained fixated on the track. 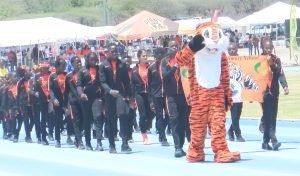 Just before the final two events, it was clear that the Charlestown Primary school was in an untouchable position, but the Joycelyn Liburd Primary and the ST. Thomas’ Primary schools were tied on points.

After the final race, interestingly enough, both schools still remained tied on points!

The Charlestown Primary school emerged as convincing champions, effectively three-peating for the event and there was an upset in the B division, as the Maude Cross Preparatory School dethroned long-reigning champions, Elizabeth Pemberton Primary. 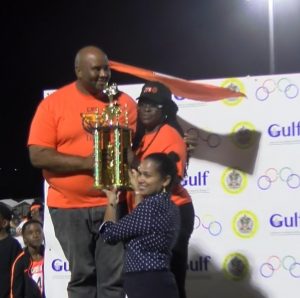 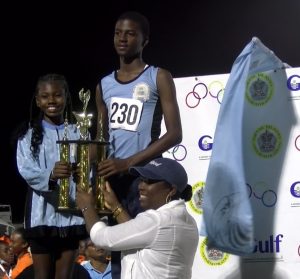