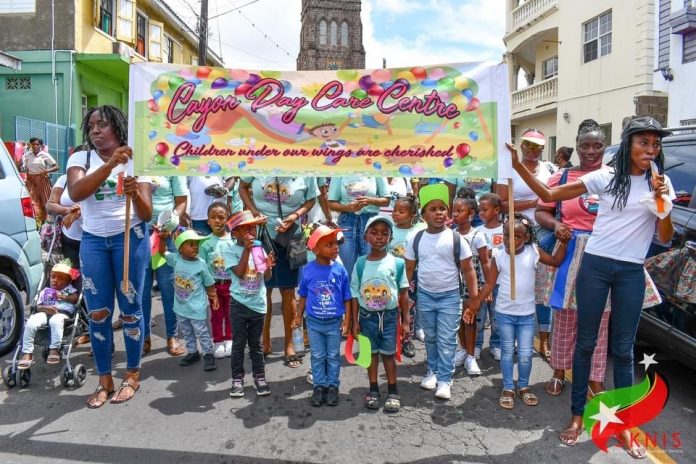 St Kitts and Nevis (WINN): Hundreds of people took to the streets of Basseterre to celebrate the children of St Kitts at the 2022 hosting of the Child’s Month March held on Friday morning June 24. In attendance were students, teachers, parents and other supporters representing the daycare centres, pre-schools and some primary schools on the island.

Child’s Month in St Kitts and Nevis is celebrated annually in the month of June. This year, the event is being held under the theme “Recycle, Save the Earth for Our Children’s Future.”

WINN FM went to Independence Square to witness the end of the march. Some of the children, teachers, and parents alike were dressed in their Child’s Month T-shirts, whilst others wore creative attire depicting the theme. The theme speaks to the importance of environmental preservation, through recycling with the children. In recent times there have been growing discussions on the matter of living green and introducing measures to support it.

Meanwhile, Local radio commentator Sylvine Henry is suggesting that while children are being celebrated, more plans and programmes need to be introduced to support children from early childhood up to high school. She added that whether the children are foreign-born or born to foreign parents, those children also need to get just as much support and opportunities as the local children.