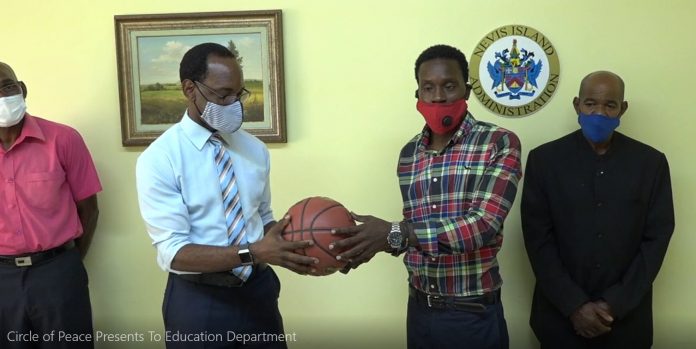 A brief, but very significant ceremony, was held at the NTV studios, on Thursday 21st January, 2021.

On that day, the organization known as The Circle of Peace, officially handed over a number of Basketballs to the Education Department, on behalf of several schools on Nevis.

The presentation ceremony was ably chaired by Ms. Elkie Edwards, Secretary of the organization. Pastor Al Forbes, the overseer of the program, offered the invocation and Ramie Gumbs, a member, delivered the feature address. Gumbs indicated that he has been a member of the organization for almost two years and pointed out that there is a positive outreach program to prisoners, ex-prisoners and vulnerable youths.

He noted that even though things are economically difficult at this time, the organization has still ensured that such a donation to the schools, is made. He beseeched the students who will use the balls, to show their appreciation for the gifts, by taking good care of them.
‘The smallest deed is greater than the best invention,’ he added.

He then officially handed over the balls to the Permanent Secretary in the Ministry of Education, Mr. Kevin Barret. The balls in this first instance, will be given to the following schools: Ivor Walters Primary; Elizabeth Pemberton Primary; St. James’ Primary; VOJN Primary and the Cecely Browne Integrated School. Similar presentations will be made to other schools, in the not too distant future.

An elated Mr. Barrett, pointed out that occasions such as these, are normally looked at from a myopic standpoint, but stated that as simple as it is, it can become a life changer for many youngsters.

He indicated that a Basketball in his hands, was probably only worth its original cost, but the same ball in the hands of a Lebron James, is extremely valuable.

He urged the youths to emulate Lebron James, recognizing the fact, that he too was a once a youngster.

He thanked the Circle of Peace, for the meaningful donation.

The original founder of the organization, Mr. John Prentice, delivered closing remarks and noted that it all started, when he was a Prison officer and an inmate told him that the job of a Prison officer, was not for him and that he should get busy in stopping persons from coming to prison and that is where the idea started.

He thanked his team members for their continued hard work and thanked the many donors to the program, who include Premier Mark Brantley and Hon. Spencer Brand, who is actually a member of the organization. He urged parents to love their children and spend time with them and teach them in the ways of God.

ABOUT THE CIRCLE OF PEACE-

The Circle of Peace was founded by Mr. John Prentice, in 1991 and has served as an outreach program to prisoners, ex-prisoners and other vulnerable youths. The program has assisted many ex-prisoners to get back to being productive citizens.

Mission: To empower the youth of the federation, to stay on the right track and to stay away from a life of crime and violence.