St. Kitts and Nevis (WINN) – WINN was made aware of a claim of a possible mould infestation at the Robert Llewelyn Bradshaw International Airport on July 22.

According to the source, the mold appears to have spread throughout the airport and at the time of writing the airport workers, airline agents and others were waiting outside of the airport’s building and that someone would come to test the air in the afternoon.

Based on the pictures shared by the source there appears to be mold in the ceiling, AC Units and hand sanitiser dispensers. 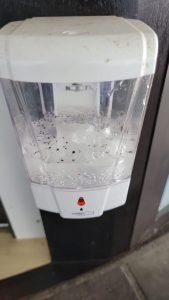 The source said that while the airport staff is avoiding staying in the building for extended periods, the general operations of the airport have continued.

However, the RLB Airport Manager, Joy Richardson, denied the infestation claims in a conversation with Jermin Abel, saying it wasn’t true.

“That is not true. A pile was wet and that is what we know. We have not had any confirmation of any mould or anything.”

The airport manager also shared that the airport is checked for such instances periodically.

“Yes we do periodic checks and some more checks will be carried out.”

WINN made several calls to Richardson and the airport’s communication team for more information on the situation but was unsuccessful at news time.

WINN will provide more information on this as it becomes available.