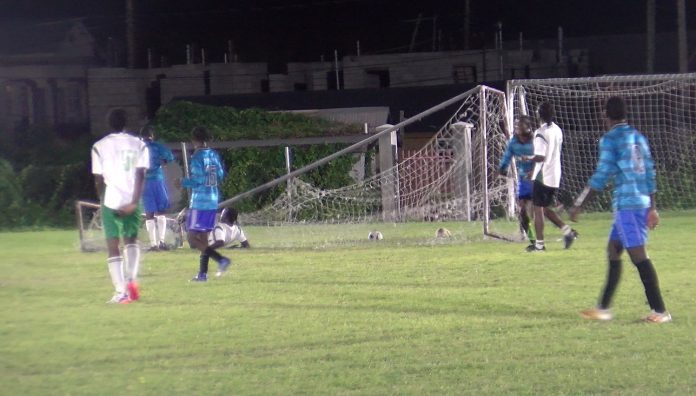 A crucially deciding game in the ongoing Clash of the Shops Football tournament, being hosted by the Bath United Football club, was played on Sunday 20th November.
Rosey’s Bar and Snackette engaged Black Hat’s Place, in a must win encounter.

Rosey’s Bar and Snackette, needed three points for a win, to get to seven points and challenge the You and Me bar for the second spot, which would then have been decided on goal difference.

It was a dingdong battle from start to finish.

Black Hat’s Place scored two goals in the first half and looked like clear winners, but Rosey’s bar and Snackette came back in the second half to score three goals.
However, Black hat’s place put away a third goal as well, to tie up the game 3 goals -all.

The draw did not help the cause of Rosey’s bar and Snackette, in progressing on the points table.

It therefore means that the two teams getting into the best of three finals, are: Black Hat’s Place and You and Me Bar.

The best of three finals commences on Thursday evening -24th November, with game number one, at the Bath Village Playing field.