Coach Leo: Victory Against The Bahamas An ‘Amazing Result’ 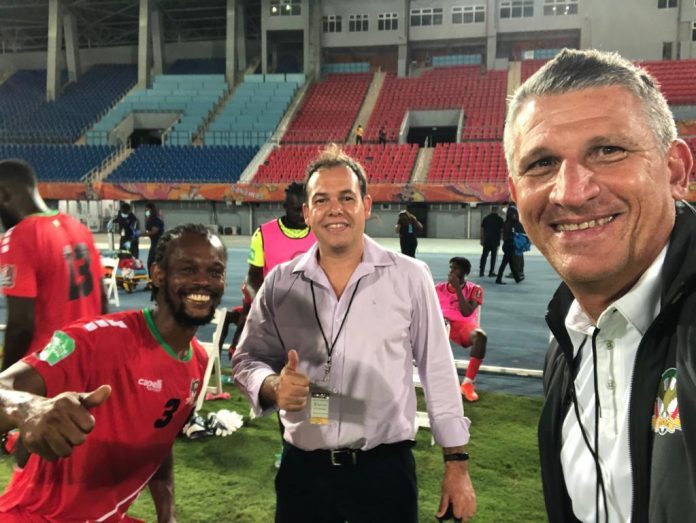 (SKNFA) The 4-0 victory against the Bahamas in Qatar World Cup Qualifying action on Saturday is an amazing result for St. Kitts and Nevis, said Coach of the Senior National Men’s team Leo Neiva. Coach Neiva said in a statement Monday he was very pleased with the result, considering the team had little preparation due to COVID-19 restrictions ahead of the first two World Cup qualifiers. He pointed out that his opponents, Puerto Rico and Bahamas played friendly matches prior to the qualifiers; Puerto Rico played three times and Bahamas twice; St. Kitts and Nevis was unable to do so. The Sugar Boyz preceded Saturday night’s victory with a 1-0 win over Puerto Rico last Wednesday.

“The more important thing for us is the six points with five goals scored and zero against. I enjoyed a lot the draw (Sunday) between Trinidad and Tobago and Puerto Rico 1-1 because we are have a plus five goal difference and Trinidad plus three,” Coach Neiva said. Trinidad and Tobago and St. Kitts and Nevis are in Group F along with Puerto Rico, the Bahamas and Guyana. “We have a real good chance to qualify…but we need to improve our preparation and always with your feet on the ground. We can’t get excited. Victories cover up mistakes,” Coach Neiva said.

Coach Neiva disclosed that the team switched formations between when they possessed the ball and when they didn’t. “The team played without possession of the ball with two lines of four, very compact and with two attackers marking their creative midfielders six in the second block. “We started to go up the line and put pressure on the opponent, always trying to maintain possession of the ball in the opponent’s field and with constant movement of our offensive players,” he disclosed. “Of course there is a lot of work to be done to solidify this game model.”

After defeating Puerto Rico last week Wednesday, Coach Neiva had high words of commendation for the players and members of his technical team.

Coach Neiva said the team played hard, simple and efficient football. “Due to COVID protocols with little training time and without international friendly, we try to focus on the tactical part to set up a solid and compact team looking to play on the opponent’s mistake to surprise them,” he said in a short written comment after that match. He said he is very satisfied with the efforts of all the staff as well as the commitment and performance of the players on the field.

St. Kitts and Nevis played in the Dominican Republic for their ‘home’ match against Puerto Rico before jetting off to the Bahamas for Saturday’s away match. These arrangements are due to COVID-19 restrictions, which require testing of players and technical staff before and after games and before travel. It is also expected that the players, coaches, technical staff and management team will be quarantined upon arrival in St. Kitts and Nevis in keeping with the Federation’s COVID-19 protocols. St. Kitts and Nevis leads Group F with six points, followed by Trinidad with four points after both teams would have played two matches each. Puerto Rico is in third place with one point, and Guyana and the Bahamas round out the table yet to register a point.

St. Kitts and Nevis next do battle in the June 2021 FIFA international window dates when they face their toughest test yet: Trinidad and Tobago and Guyana. To progress from this Group to the next qualifying round, St. Kitts and Nevis would need to top the group and a victory in their next match would all but assure that result.