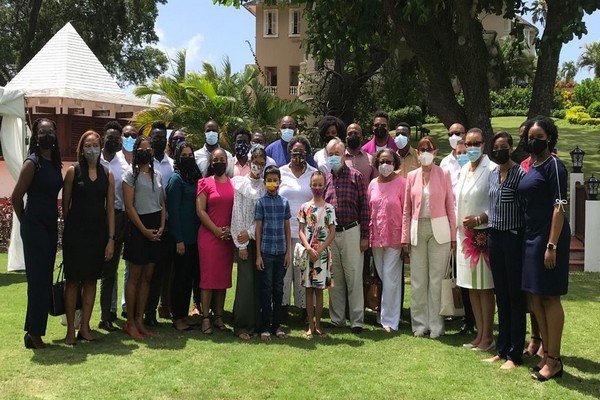 (Press Release) “You are not just the leaders of tomorrow but the leaders of today, I encourage you to be the change that you want to see,” said Commonwealth Secretary-General, the Rt Hon Patricia Scotland QC to 20 young Bajans and FutureBarbados candidates who were attending a ‘Rapid Talk’ session in Bridgetown, Barbados on October 3rd.

Speaking about the need to empower youth, Secretary-General Scotland said:

“The youth of today know that they will face the burden tomorrow and they are seeking to meaningfully participate in decision-making processes that will affect their future. It is vital that young people are given the opportunity and are empowered within our current political economic system as a lever of change and considered as co-creators of solutions for their future.”

After listening to the young people explain their thoughts, concerns and ideas for the future, Secretary-General Scotland invited all 20 youth to join a Commonwealth and Cambridge University Initiative – the ‘Cambridge Collaboration Policy Boot Camp & Policy Simulation Labs’.

Working together for a better future

This initiative gives youth the opportunity and power to take part in the policy decision making process. It aims to help build resilient economic infrastructure to support Small Island Developing States to attract sustainable finance for investment in youth and biodiversity. In the wake of COVID-19, this initiative will help small state decision-makers to improve resilience-thinking capacity as they build towards a better future.

During the rapid talk event Prime Minister Mottley called on the youth of her country to “Please continue to dare to dream, but always be determined to do, because it is the anchoring of both, that will bring progress…. Life is not only about success; it’s about pitfalls and support and the resilience needed to get up.”

Secretary-General Guterres added: “The first important thing is to accelerate the transfer of power from my generation to your generation. It’s time for my generation to understand that you need not only to be able to be listened to, but you need to have a difference on the decisions that are taken and on the construction of the future”.