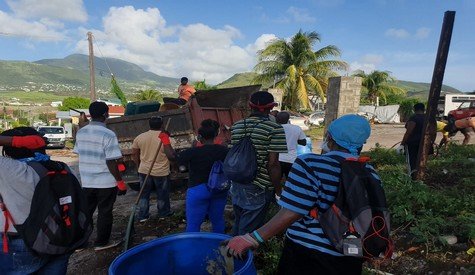 St Kitts and Nevis (WINN): Community clean-ups continue around the federation as we draw closer to Independence on September 19.

Jamella Christopher of Solid Waste Management Corporation was on the Talking Trash segment of the WINN’s weekday morning show Island Tea mentioned general clean-up as we continue on into the Christmas season.

Christopher also went on to make reference of the various community clean-up initiatives that have been going on through the island.

“The Solid Waste in cooperation with [the] Ministry of Tourism and [the] Ministry of Environment is on a clean-up project currently where they are going around and cleaning up a number of hot spots… The problem is, after they have cleaned up person are going back to that area to dump. Now Solid Waste has their responsibility; however, the public [also] has their responsibility…”

The St. Kitts Sustainable Destination Council along with other stakeholders engaged in various community clean-ups including one on August 15, 2020, at the Aquifer area and Fisheries Complex in Basseterre.

Chairperson of the St. Kitts Sustainable Destination Council, Diannille Taylor-Williams highlighted the Aquifer as one of the most pressing areas for cleanup because it supplies most of the water in East Basseterre.

“We’ve started thes community clean-ups based on the outcry from Solid Waste about the number of [illegal] dump sites around the island and so we reached out to them to see how we could work together to not only clean-up but to create awareness, because one of the things we don’t want and we’ve already seen signs of; at the aquifer which is the first area we cleaned once we’ve clean people go back and start dumping.”

Christopher and Williams shared a similar sentiment in the need for the community to take some responsibility in keeping their area from becoming a dump site. Christopher stated:
“I can say what some communities did such as Cedar Grove and Mattingley, they had a community watch, and so they allocated persons in the night to actually scout out and they did find a number of the culprits. They also place cameras strategically and so they curbed that problem in less than a month… Communities have to have some sort of responsibilities and commitment to their environment…”

Williams went on to share that awareness is one of the biggest factors in these efforts. Making sure that communities that are hot spots are aware and for them to be vigilant.
“It comes with awareness…here are litter wardens… Solid Waste… they have those on board but a lot of the dumping based on the information they have received tends to happen at late nights… they’re going to be putting a watch on that.”

Williams stated that there have been ongoing discussions about the installation of surveillance camera; however, the current economic state does not bode well in terms of acquiring such equipment at the known hotspots.

The community clean-ups involving the St. Kitts Sustainable Destination Council were held under the theme “Keeping COVID Out By Cleaning Up” as a means of safeguarding the nation against COVID-19 by cleaning up surrounding areas and creating a healthier St. Kitts.

The St. Kitts Sustainable Destination Council, the Ministry of Tourism, the Solid Waste Management Corporation, the Department of Environment, Skills Training Empowerment Programme and the Parks and Beaches Unit are some of the stakeholders involved in the community clean-ups.

In keeping with the clean-up theme, SOL Island Auto Conaree Football Club also had their fourth annual Independence clean-up within the Conaree village and Needmus Estate areas on September 12 in partnership with the Skills Training Empowerment Programme and the St. Kitts Sustainable Destination Council.

The series of Community clean-up activities continue and concentrate on the Fort Thomas Hotel in West Basseterre and the Shadwell and College Street Ghaut areas of Central Basseterre. The Skills Training Empowerment Programme Community Enhancement workers are also expected to be involved in the clean-up focused on the Shadwell and Monkey Hill areas.