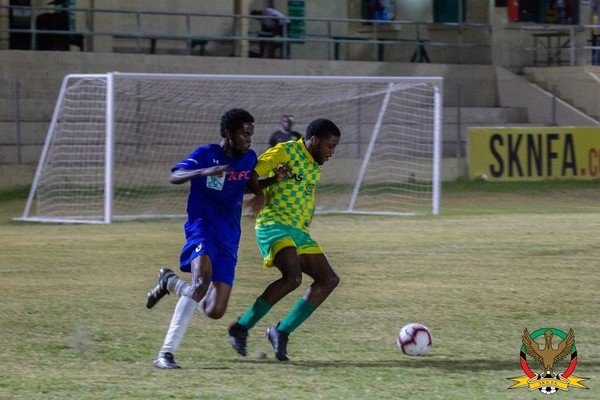 SOL IAS Conaree F.C. are back to winning ways after defeating KFC United Old Road Jets 2-0 on Sunday in the SKNFA Premier League at Warner Park.

The match was very physical and quite a few fouls were called on either side-even earning a red card for Old Road’s Assistant Coach Roger Hendricks who was sent off after final whistle for offensive and insulting language. The victory for Conaree was welcome having lost their previous two matches under new coach Al Richards, who previously served as an assistant coach to Village Superstars last season and St. Peters F.C. at the start of this season. This is also the first victory for Richards as coach of Conaree, after taking over from Asim Jenkins who left the club after only a season. Old Road on the other hand, having a great start to the season have now suffered two back losses. Football analysts Loshaun Dixon and Kenneth Bobb provided post-match analysis in the SKNFA Premier League Live Broadcast, focusing on the performance of both teams.

“I thought Conaree played a good game,” said Loshaun Dixon, sports journalist and a member of the panel. “I thought they organized themselves well defensively first and then they were able to hit Old Road on the counter attack for the two goals and they could have had more,” he added. He said Old Road was better in the second half after a flat first half and had it not been for Conaree’s goalkeeper Clifford Samuel, may have gotten some goals. Football analyst Kenneth Bobb agreed. “Initially in the first half they were trading punch for punch with Old Road, which is obviously a younger team. Conaree used their experience and soaked up the pressure and when they attacked, they attacked in numbers,” Bobb surmised.

Football analysts Al Edwards and Esinton Watts in the post-game show, believe when Dieppe Bay scored what was then the equalizer: Cayon woke up and played the way they should have earlier on. “That’s when the adrenaline started to flow because we only had 15 minutes (remaining in the match when the equalizer was scored). Now they started to play more urgently,” he said.