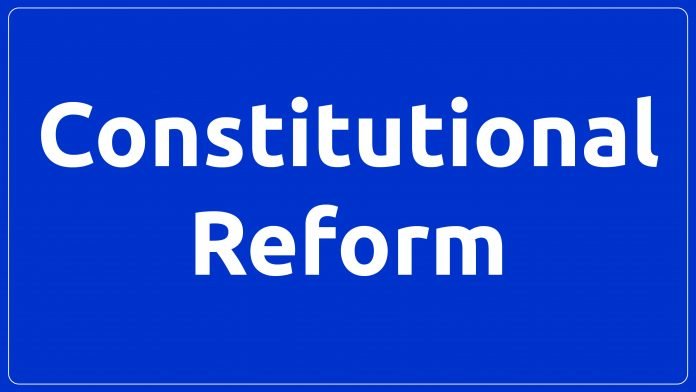 St. Kitts and Nevis (WINN): Constitutional reform has been a talking point in the political sphere of St. Kitts and Nevis since the transition to the Unity Government in 2015 and reemerged as a campaign point during the recent 2022 General Elections in the Federation.

Most recently, the Republic of Barbados has embarked on its journey of creating a new constitution after cutting ties with Queen Elizabeth II.

The need for broader reforms in the Caribbean was raised by E. Anthony Ross QC in a press conference by the Eastern Caribbean Alliance for Diversity and Equality on August 30 following the ruling in St. Kitts and Nevis that certain consensual sexual conduct between adults (18 years and older) in private in was decriminalised, namely buggery and its related crimes.

Queen’s Counsel Ross hoped that the governments would change their approach towards the review of what he calls ‘bad laws’.

“I trust that the Attorneys General, in general, will take note and if they need, go find somebody to help fund them to look over all of their laws and try to bring a lot of these discriminatory and bad laws [and] bring them in line. While they are doing that, they ought to remember that if it was not for Gandhi opposing bad laws in India, India might still have been a colony. And if it was not for Madela opposing bad laws in South Africa, we don’t know; apartheid might still have been in place.”

During the General Elections, the Chief of Mission for the Organisation of American States (OAS) Electoral Observation Mission to St. Kitts and Nevis, former Prime Minister of Jamaica Bruce Golding, highlighted the need for reform, especially with the electoral process.

Chief Golding urged the incoming government to deal with reform issues as early as possible.

“Perhaps because the government has all kinds of other urgent priorities, very little attention is paid to it, and it therefore languishes, and it is when the next elections come around that we say, “hey, you know we didn’t pay attention to this”, and you go to the problem all over again. We are going to urger that the government, whichever government is elected, attend to the issues of electoral reform and to do it early; to have the necessary discussions, [and] consultation; not only among the political parties but with the society, with the public; have them properly informed so that we can have those improvements put in place long before the next elections are due.”

The Premier of Nevis, the Hon Mark Brantley, during his press conference on August 30, brought up the issue of constitutional reform and said it would require the government and opposition to work together.

The Premier referenced the situation with the Governor-General His Excellency Sir S. W. Tapley Seaton during the height of the collapse of the tripartite Unity Coalition in May.

“I think that our Constitution has shown some limitations in recent years. The unfortunate occurrence… of a Governor-General refusing to disappoint a Prime Minister, at the request of the majority of the Parliament, but at the same time, agreeing that that Prime Minister should disappoint the majority of the Parliament; I think that that’s a travesty. And it’s things like those in my view that need to be corrected so that functionaries can hide behind saying well, nothing explicit is there, so, therefore, I can act.”

He added that the constitution should reflect that a Prime Minister and Premier can be recalled if they lose the support of the majority of elected officials that agreed to the person holding those two positions.

“I think that we need to make it clear that any Prime Minister or Premier can be recalled because if they are in that position and have that title solely on the basis that the majority of elected members support them and if that support is lost, then that title must also be lost. Because it means you are reduced to an ordinary member of parliament just like everybody else… nobody in St. Kitts voted by Prime Minister, the people No. 7 voted for Dr Timothy Harris as their representative, the rest of us who were elected then said that he would be the Prime Minister… So it follows, to my mind logically, that if we said that he would be the Prime minister, and then we went back at some point and [said] we changed our minds, and he no longer enjoys that majority, then I cannot understand why it would be said that the Governor-General could not act. And then that sort of salt to the wound, the person who had lost that support of the majority was still able to go the Governor General and say you know what [let us] fire the whole majority.”

After becoming Prime Minister, in one of his first interviews, the Hon. Dr. Drew spoke of the need to address certain matters within the constitution and elections act, namely workers’ rights, education, electoral reforms and constituency boundaries.

“In our Legislative agenda, how does it relate to the Nevis issue to make sure that once and for all, we start dealing critically with some of the issues between our islands, and that has to be done from a legislative standpoint? And looking in the legislation as well to take it a bit further to see people’s rights to education, people’s rights to healthcare and so forth… when you look also at workers rights. Are workers fully protected? Do we need more legislation to make sure that workers’ rights are protected? For example, during the COVID, when people were told if [they] did not take a vaccine, [they] will be fired and so forth…people know my own position, but even from a scientific standpoint, there is no basis for anything like that,” said Prime Minister Drew during an interview with SKN Newsline.

The Prime Minister and Premier of the Federation have both signalled the need for constitutional reform and the willingness to collaborate on the issues within the set of laws governing the islands. It is up to the new iterations of the Parliament, expected to be convened by November, to determine whether constitutional reform is possible under the new government.