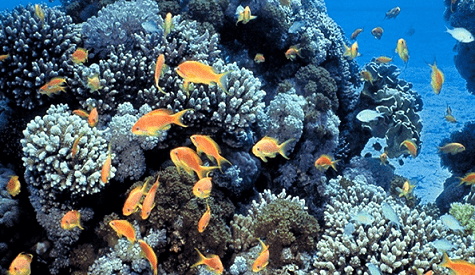 Commonwealth countries are responsible for more than a third of the world’s coastal ocean, and 45 percent of its coral reefs.

The new tool will use satellite technology to create country-specific data and generate high-resolution images to help map, manage and monitor coral reefs in the Commonwealth.

Announcing the initiative in time for World Reef Awareness Day, 1 June, Secretary-General Patricia Scotland said: “The threats confronting our ocean are numerous and can be perceived by governments as overwhelming, with 90 percent of coral reefs at risk of disappearing within the next few decades due to climate change.

“That is why Commonwealth leaders launched the Commonwealth Blue Charter in 2018, which is a shared commitment from all 54 member countries to tackle urgent ocean issues together. Our partnership with Vulcan Inc, as well as others in the private sector, academia and science networks, will work to translate our vision into meaningful on-the-water actions.”

Building on the technology behind Vulcan’s Allen Coral Atlas – a public platform that converts data from a range of sources to generate detailed maps, images and alerts on coral reefs – a dynamic interactive coral reef map will be hosted online on the Commonwealth Innovation Hub. The information it contains will support marine ecosystem planning, management, governance and community action in member countries.

Chuck Cooper, Managing Director of Government and Community Relations at Vulcan said: “We have already lost 50 per cent of the world’s coral reefs which support the safety, well-being, and economic security of hundreds of millions of people. The Allen Coral Atlas is helping to provide foundational data which inform critically important conservation efforts. Working with Commonwealth countries, we can change the trajectory of the coral reef crisis.”

The joint project will be unveiled with a special virtual presentation on World Oceans Day, 8 June.

This event, titled ‘Mapping the Commonwealth one coral reef at a time,’ will also feature presentations from three Blue Charter Action groups, focusing on: Coral Reef Protection and Restoration, Ocean and Climate Change, and Mangrove Ecosystems and Livelihoods.

The Commonwealth Blue Charter is implemented by 10 country-driven action groups that share experiences and coordinate action to tackle ocean challenges. The presentations will highlight how the groups work together and the importance of accurate and live data to support management decisions.