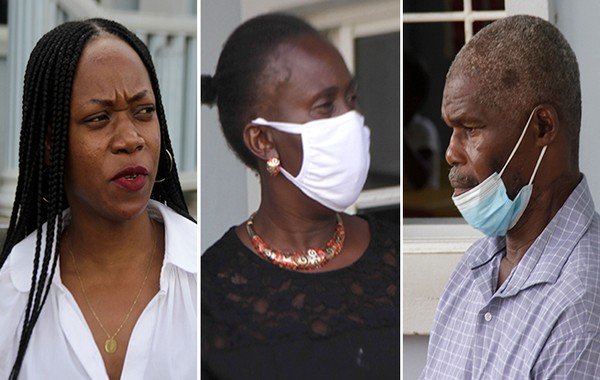 (iWitness News) The Mespotamia Magistrate’s Court, on Monday, ruled against the defence in the trial of government senator Ashelle Morgan and Karim Nelson, an assistant director of public prosecution, and allowed evidence about calls that the senator allegedly made to the wife of the virtual complainant, Cornelius John, on April 13, the day that he was shot at his home.

“In absence of authority directing me to omit evidence of Mrs John, I will proceed. If I am wrong, there are other means of redress,” Magistrate Bertie Pompey ruled in the trial, which is taking place at Calliaqua.

Before the ruling, the defence and the prosecution renewed the arguments which they had made to the court on Friday.

Defence counsel, Ronald Marks had made the application that the court wipe Nicole John’s testimony from the record.

Mrs John took the stand on Friday, Day 3 of the trial, in which Nelson stands accused of wounding John, 63, of Diamond, by shooting him in the left leg, and unlawfully discharging a firearm at him.

Morgan, a lawyer, is accused of assaulting John.

The offences were allegedly committed on April 13, at Diamond, the same date and place that Mr. John is alleged to have used threatening language to Morgan — for which he is to be tried.

Mrs. John took the stand at 9:13 a.m.Friday, and, like all of the other witnesses, was affirmed.

iWitness News is delaying its reportage of the actual evidence in the case in keeping with an order by the presiding magistrate, after the prosecutor, S. Stephen Brette, complained about the detailed nature of our initial reports from Day 1 of the trial.

Mrs. John told the court about her interactions with Morgan, their activities on April 13, and phone calls that she had with Morgan on that day.

The witness was about to tell the court about what allegedly occurred on April 14 when Counsel Ronald “Ronnie” Marks, who is representing Nelson, rose.