Cracks In Team Unity, Critics Contend But The Coalition Says It Is As United As Ever 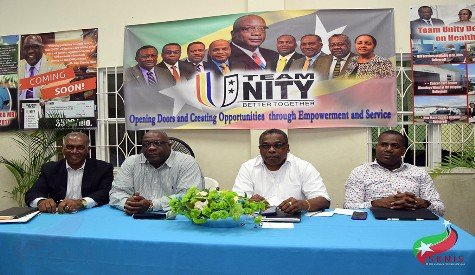 St Kitts and Nevis (WINN): How united is the Team Unity coalition at the moment – not very insists its critics, including the Opposition St Kitts Nevis Labour Party.

The three-party coalition just ahead of the June 5th general elections is putting forth what appears to be a tight united front, and brushing aside the claims of cracks within the alliance.

However, attorney at law and commentator Chesley Hamilton who during the past five years turned from Team Unity advocate to vocal critic, suggests that there are visible cracks within the alliance that speak to the problems that PAM, CCM and the PLP have as a working coalition.

Hamilton, speaking on WINN FM’s Voices programme Thursday, said the number of leading officials of the Coalition who have moved away from it shows that there is a problem within the Peoples Labour Party in particular.

He mentioned former executive members Douglas Wattley, Clecton Phillip, and more recently Sam Condor, along with Dwyer Astaphan and himself Hamilton, as indications that all has not been well within the alliance for a while now.

It is a suggestion fully embraced by the Labour Party and its Leader Denzil who continues to make a case that there are many cracks within the coalition administration.