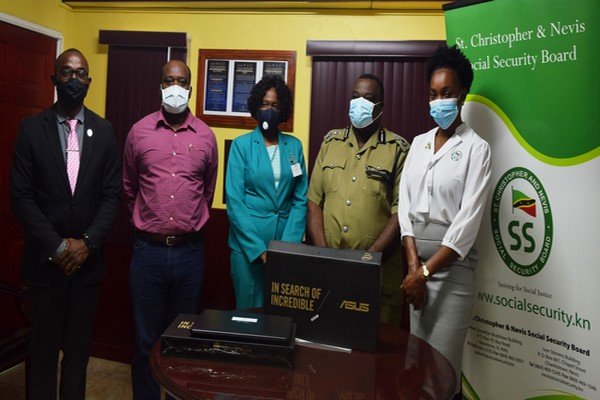 Basseterre, St. Kitts (RSCNPF): The efficiency of the detectives at the Criminal Investigation Department (CID) in preparing documents necessary for court will be improved with the donation of two laptops from the Social Security Board (SSB).

Officials from the SSB made the presentation on Friday, April 09, 2021, during a brief handing over ceremony at Police Headquarters. Commissioner of Police Hilroy Brandy explained that, some months ago, he approached the SSB to request their assistance with the procurement of laptops for detectives in the CID. Last year, Commissioner Brandy was informed by the Director of Public Prosecution that paper committals would replace preliminary inquiries in court. Paper committals require that all evidence be tendered to the magistrate in the form of typed statements.

The Commissioner expressed his gratitude for the kind gesture. He added that SSB’s donation during this difficult and financially challenging period demonstrated the institution’s strong commitment to assisting the Police with its crime fighting efforts.

“Crime fighting is not just for the Police. Crime fighting is for the entire country and I’m very happy that Social Security can come onboard and show their generosity by donating these two computers this morning. It is always [good] when you have corporate institutions and private citizens donating to the organization. That means they have the interest of the country at heart when it comes to crime fighting,” he said.

Speaking on behalf of the SSB, Chief Financial Officer, Marilyn Johnson, disclosed that they have supported the Ministry of National Security over the years in tangible ways.

“While we focus on the financial security of our members, we do recognize that the physical security and safety of our citizens are very important to the sustainability of our economy on which Social Security thrives,” Ms. Johnson explained. “So in recognition of our desire to partner with you, and support you in what you do, we have made this donation of these two computers. We wish we could do more, but we will continue to support you as time goes along.”

“We recognize that computers and laptops are necessary tools these days for you to be effective and efficient in what you do and so, on behalf of the St. Christopher and Nevis Social Security Board, the Director, and senior management and staff, it gives me great pleasure to present to you these laptops, and we trust that they will help you in the execution of your duties in keeping our country safe,” said Ms. Johnson just before presenting the devices to the Commissioner.