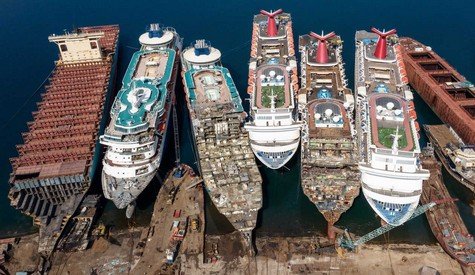 (VI Consortium) With the Covid-19 pandemic showing no signs of slowing, the number of cruise liners and cargo ships appearing at sites to be scrapped in the recycling market this year has grown. The growth is owing to cruise liners’ and cargo ship operators’ need to turn grounded vessels into cash.

Leading the way are iron ore haulers, according to the Wall Street Journal, followed by cruise ships as that industry was hit hard by the Covid-19-induced shutdowns that took effect in March. Though the CDC lifted the no-sail order on Oct. 1, most vessels are expected to recommence limited voyages in January. And the first attempt at cruising had to be aborted after 6 people contracted the disease aboard a Caribbean cruise last week.

As for the ship operators that move vehicles around the world, the resort to scrapping is an effort to restore balance sheets that were whiplashed by the global industrial downturn led by China’s shutdown at the start of 2020 and spreading throughout the world thereafter. According to WSJ, citing data provider Statista, manufacturing activity around the world has recovered this fall and automotive sales have rebounded. However, global vehicle sales are still expected to fall below last year’s 75-million tally to around 62 million this year.