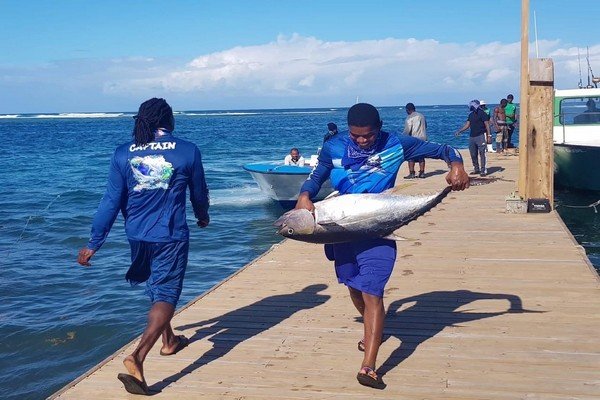 The fishing event was hosted in the recently enhanced fish handling site in Dieppe Bay and was the inaugural fishing championship, in observance of World Fisheries Day.

Permanent Secretary in the Ministry of Agriculture, Fisheries and Marine Resources, Mr. Ron Dublin-Collins said he was pleased with the public’s support of the competition. “The general public has come out in large numbers, bigger than what we expected’, he said.”We continue to celebrate the skillset that is here in our Federation among our fishers”, he added.

The public support of the competition was evident online as members of the public expressed support of the initiative. When the Ministry posted event photos online, one person commented, “Love to see that. I remember an old saying, if [you] give one a fish it’s to feed themself but teach them to fish they can feed a nation”.

Fisherman, Everton Forde, also commented on the post thanking the organisers “Give thanks to DMR for giving us such opportunities [and] support our field of fishing while bringing fishermen together”.

An image of a 200lb Tiger Shark that was caught during the competition was also shared on Facebook.

Prizes on the day including additional giveaways from the event’s sponsors were:

Watch the video from the Ministry of Agriculture Fisheries & Marine below