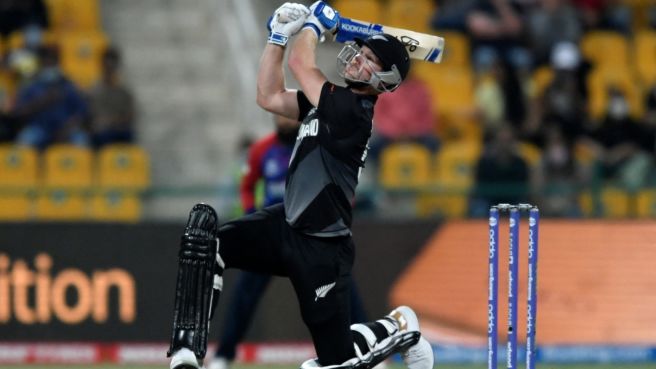 (ESPNcricinfo) – James Neesham contemplated retirement in 2017. He didn’t. Daryl Mitchell never contemplated opening the batting. He did. And together they dragged a New Zealand side adamantly trying to lose all the way to a T20 World Cup final.

It was utter madness. And it came from outta nowhere. England, much like they did five years ago on a sparkling night in Kolkata, had the game in their hands. And not one but two big-hitting allrounders took it away from them.

The equation was 57 off 24. More than two runs a ball. As much as conditions in this tournament have favoured the team batting second, here there was no dew. The single biggest thing that made run-scoring easy on these dry UAE pitches was nowhere to be found.

That’s why Mitchell – the best T20 six-hitter in New Zealand’s domestic circuit for the last five years – could find only one boundary in the first 10 overs of a 167 chase.

That’s why Martin Guptill and Kane Williamson were dismissed for single-digits.

That’s why Liam Livingstone could bowl four overs of his part-time all-sorts for just 22 runs. When he finished his spell – after taking out New Zealand’s then top-scorer Devon Conway for 46 – England’s chance of victory according to ESPNcricinfo’s forecaster was nudging 80%.

Neesham has had enough of these games. His Twitter timeline is a tribute to his wit – yes – but also to how badly that 2019 World Cup final broke him. He was out there in the Super Over. He hit Jofra Archer for a six. He ignited New Zealand’s hopes when they really shouldn’t have had any on that night only for them to fall so agonizingly short.

Just as Neesham and everyone watching were reeling from the Deja vu, Chris Jordan came up to bowl and leaked a monster six over square leg. That shot became the centerpiece of New Zealand’s breathtaking resurrection, 23 runs coming off an eight-ball 17th over – including a relay catch that quickly morphed into another monster six – as one of England’s go-to men just crumbled under pressure.

Suddenly New Zealand only needed 34 off 18 balls. And it was Mitchell’s cue to wind up. He set up deep in his crease. His front leg had the good sense to keep away. Chris Woakes missed his lengths. And three brutal hits in the 19th over – two over the ropes and one onto it – brought sweet, unbelievable and everlasting victory.

England change it up
This semi-final had all the feels of two heavyweight boxers sizing each other up. But there was no real KO punch.

Jos Buttler and Jonny Bairstow were rather cautious at the top, their game plan dictated in equal parts by the early swing on offer and the big occasion they found themselves in.

England went away from their typical T20 template – attack every ball – to a more nuanced one – respect every ball. For the first time since 2014, they had to wait till after the 15th over of the game to pick up their first six.

Malan and Moeen adapt
England’s approach protected them from early wickets, but that left a lot on the middle-order’s shoulders. A middle order that hasn’t had too much time in the middle at this tournament.

But Dawid Malan controlled things beautifully. If you’re in any doubt about that, pull up clips of his cover drives. With flowing hands and sublime timing, he guided England through the middle overs and was unlucky to miss out on a half-century.

Moeen Ali didn’t make that mistake. Playing the world’s most elegant leg-side slogs, his 51* off 37 provided the finishing kick that took a good total to a defendable one. With most of England’s batting tonight revolving around left-handed blades, New Zealand’s best spinner Mitchell Santner bowled only one of his four overs.

Woakes – who before this World Cup was left in T20I wilderness for five-and-a-half years – picked up both those wickets and set England on their victory march. This team prides itself in being on cutting edge pf both batting and bowling. But in Abu Dhabi – where cricket takes a time machine back to the 90s – they realized knocking it around for 160 and building on scoreboard pressure with tight Test-match lengths had the better chance of success.

And all of that would worked a treat if a big-hitting allrounder hadn’t decided to turn everything on its head. Again.