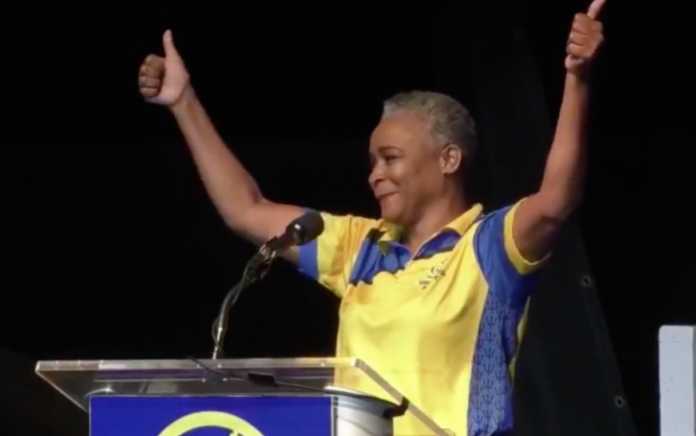 (Barbados Today) Declaring there will be no loose promises from the Democratic Labour Party (DLP) platform, an energised Verla De Peiza on Sunday night laid bare her party’s agenda within the first 90 days of office if elected to office on January 19.

Ahead of the planned release of the party’s manifesto on Thursday at the Wayne Daniel Pavilion and Playing Field, Brereton, St Philip, De Peiza zeroed in on ensuring accountability and fixing the island’s fiscal space, touting plans to introduce fiscal responsibility laws, integrity in public life legislation, the removal of the foreign exchange fee imposed by the previous DLP administration, and new provisions for credit unions, among other things.

On the party’s platform, mounted at Haggatt Hall for the candidates’ showcase which was preceded by performances by some of the island’s top artistes, De Peiza told the attentive crowd that the first order of business would be the introduction of fiscal responsibility laws that ensure Barbados operates within its means and is able to pay its debts going forward.

“We have to have a manageable debt ceiling so that we keep within manageable targets and we have right now to be able to give ourselves a little room. So that the debt-to-GDP target will be 60 per cent of GDP because you do need to have little wiggle room,” she said, while accusing the Mia Mottley administration of “wild” spending.

She insisted that financial prudence could only work if there are checks and balances in place, and promised that government ministers and not senior public servants would have to respond to issues raised in the annual Auditor-General’s report, under a new DLP administration.

De Peiza, who also declared that Barbadians were tired of political leaders playing football with long-awaited integrity in public life legislation, assured the DLP would get the job done saying, “we now have several templates that were passed but never made it to the statute books” and this would help the party to deliver on the promise.

She underscored that the DLP, which was ousted in a record election defeat in 2018 after two terms in office, would offer measured relief.

In this regard, she cited the removal of the foreign exchange fee which she said the International Monetary Fund (IMF) had called for its removal. The two per cent charge on credit card transactions and other foreign exchange transactions went into effect in 2017 under the Freundel Stuart-led government.

“A new DLP administration will bring that to an end. That will allow our people who access goods from overseas to let their money go a little further and there will be other economies of scale that will write that balance,” De Peiza said.

She further outlined intentions to make provisions for a $100,000 foreign exchange allowance to individuals who are trading financial assets regionally and internationally, “because there is only so much that you can invest in Barbados and we need now to teach our people to invest”.

“That sets us up for the future,” she said.

If her party is elected, De Peiza also pledged that the credit union movement will be enabled to expand to provide a wider range of financial products and services to its members.

The political hopeful, who is hoping for success in the St Lucy riding after consecutive defeats in Christ Church West in the 2013 and 2018 general elections, made clear that she was not “playing for second place” in the pending poll.

Charging that the ruling Barbados Labour Party wants “a low turnout”, as she again knocked the calling of an election at the height of the COVID-19 pandemic, De Peiza urged party supporters to stand up for what is right and “come back home and come out to vote because this country is depending on you”.