Death Toll in Haiti Continues to Rise After 7.2 Earthquake 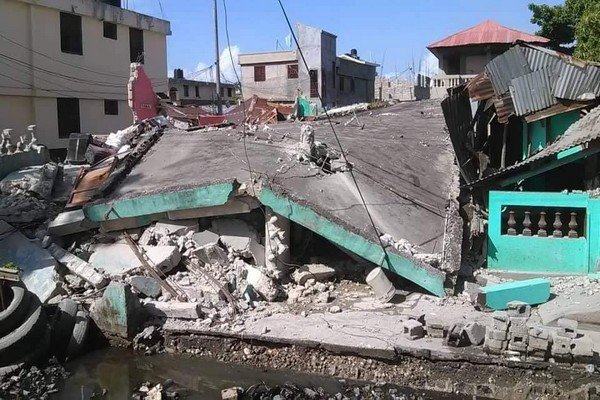 St. Kitts and Nevis (WINN): Haitian officials measure the damage done by a 7.2 magnitude earthquake on Saturday as the death toll rises.

“We know that approximately 16 percent of the country’s population has been affected and that the impact has been most felt in three of the Southern departments. These are the South, Grand’Anse, and Nippes departments,” explained the Director of the Caribbean Disaster Emergency Management Agency (CDEMA), Elizabeth Riley, when addressing the damage caused by the earthquake that rocked Haiti over the weekend with its epicentre within the southern peninsular of the island.

Riley made those remarks during a press conference on Monday, August 16.

Haiti has been placed under a state of emergency for one month as a result of the earthquake, according to Riley.

The United States Geological Survey said the quake struck five miles from Petit Trou de Nippes in the western part of the country, about 80 miles west of Port-au-Prince. Seismologists said it had a depth of seven miles and was felt as far away as Jamaica, 200 miles away.

“Our humanitarian colleagues are telling us that access to the southern peninsula where the quake hit is challenging because gangs are controlling movements,” said Stephane Dujarric, UN Secretary General’s Spokesman.

Regionally the CDEMA director shared the aid being offered to Haiti included search and rescue personnel and emergency medical support but was asked to stand down.

“On Saturday, immediately after the earthquake, this was done in collaboration with Jamaica, the second regional focal point and the Pan American Health Organization, and at the time the standby arrangements were made to deliver both search and rescue, as well as emergency medical support to Haiti. Now those arrangements were stood down yesterday, Sunday, August the 15th, and that was following consultations with and guidance from the Department of Civil Protection [in Haiti] when they advised us that that type of support would not be required from the CDEMA system. They have, however, made an official request to us, it came through last night [Sunday, August 15] for assistance through the regional response mechanism in the area of coordination support, and this will take the form of personnel that would support the National Emergency Operations Center in Port-au-Prince,”

Additionally, as of 8:07 a.m., August 17, Tropical storm Grace is making her way through between Haiti and Jamaica with the eye set on Cuba. 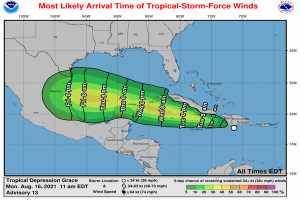 After reeling from an earthquake, Haiti is under a flood warning. According to the National Oceanic and Atmospheric Administration’s National Hurricane Center, a Tropical Storm watch was put in effect for the entire coast of the territory.