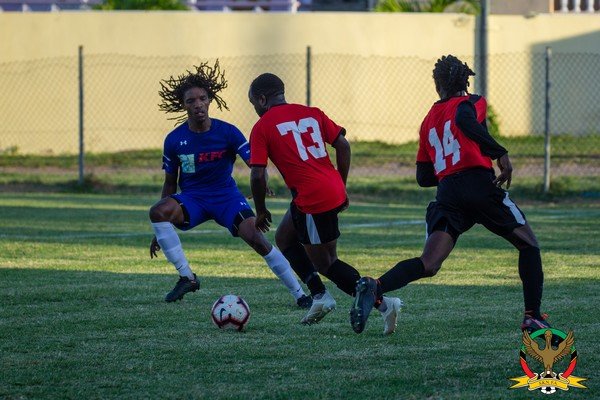 It took a last-minute goal from Kolonjie Clarke to give defending Premier League Champions S. L. Horsfords St. Paul’s a 2-1 victory over the red-hot KFC United Old Road Jets. The Jets were in great form coming into this match, having won their last three matches impressively while conceding very few goals. But despite Old Road taking the lead from the penalty spot in the 57th minute from the boot of top striker Tiquanny Williams, St. Paul’s proved their mark of a champion team. Akimba Lawrence equalized in the 76th minute and Clarke sealed the win in the 90th minute. Manager of the St. Paul’s team Derionne Edmeade said the victory for his team was well deserved.

“First of all, we have to give kudos to Old Road. I think Old Road came out tonight and they played an excellent game. Our backs were against the wall…but the guys were determined to win tonight after we losing our last game against St. Peters…the guys really fought for the victory,” Edmeade disclosed.

In the second match on Saturday night, Hobson Enterprises Garden Hotspurs continued their great run of form when they dispatched a struggling SOL IAS Conaree F.C. 3-0.

Coach Austin Deco Huggins praised their players for the win but said they have to remain mentally strong to keep the high level of performance. “We still got to be mentally ready; meaning that we cannot really get too complacent knowing that we are now sitting at the top of the table,” Huggins said. “We have a long way to go still so we still have to be mentally tough to make sure we continue to work very hard and take each game one game at a time,” he added.