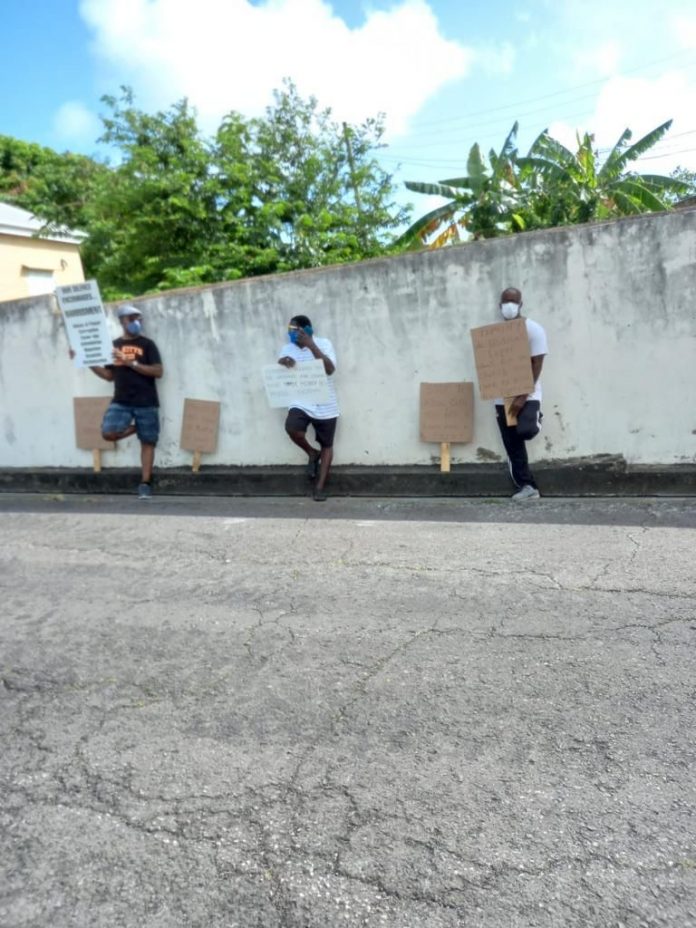 St Kitts and Nevis (WINN): Demonstrators gathered outside the Cayon Church of God on Sunday May 22, where the Prime Minister of St. Kitts and Nevis the Hon Dr. Timothy Harris and a large contingent of members and supporters of the Peoples Labour Party (PLP) were attending Sunday worship.

The demonstrators, with placards in hand, were insisting that the Prime Minister not use the church as a campaign platform for the upcoming national election.

WINN FM (May 23) spoke to one of the demonstrators Mr. Curtis Crooke, who explained that he personally was also standing in solidarity with Dave Browne, the son of Reverend Dr. Ben Browne, Pastor of the Cayon Church of God, who was terminated by The St. Kitts Nevis Anguilla Trading and Development Company Limited (TDC). Crooke questioned the Prime Minister’s attendance at the church, considering what had happened to the pastor’s son.

The Royal St. Christopher and Nevis Police Force and The St. Kitts-Nevis Defence Force were called to maintain order, an act criticised by the demonstrators.

In Crooke’s opinion the Right to Freedom of Speech and Expression is being severely limited in today’s St. Kitts and Nevis society. Crooke suggested that some constitutional reform is necessary for the Federation’s future.

Crooke said, “We need to educate our people about their rights. I think that is one of the biggest problems. A lot of the people do not understand their rights; so they are afraid to stand up because these politicians just trample on your rights. So we need to change a lot of things. To me, the constitution needs a full overhaul. This Constitution we have, I don’t know what to say about it. You see the mess we are in today; and every time you go to the Constitution, there’s some kind of foolish loophole. The ordinary man should be able to understand the Constitution.”

Crooke suggested that the Constitution be designed in a simple and straightforward manner.

WINN FM asked Crooke to describe how the discourse between the police and demonstrators unfolded outside the church.

“We were there very quietly, sitting, enjoying the service and a [female] police officer came up and she said, we’re not allowed to be outside the church. So we asked “why we cannot stand here?” We are not disturbing anybody.” She said, “well we got a phone call [saying] that y’all are disturbing the church.” We asked, “disturbing the church?”

Crooke further explained, “So she (the police officer) said, “well you can go on the other side.” When we looked we saw all these police coming with big guns; army men and the whole works. So we tried to work out, “well, what is going on here?” So we actually moved and [stood] up next to where we were standing, on an empty lot.”

It is unlikely that individuals in St. Kitts and Nevis demonstrate in the vicinity of a church, whilst worship is ongoing. Some persons on social media therefore questioned whether or not the time and setting was appropriate, whilst others either praised the demonstrators for standing up or condemned them for their lack of reverence to God.

Crooke insisted that the demonstration had absolutely nothing to do with the church.