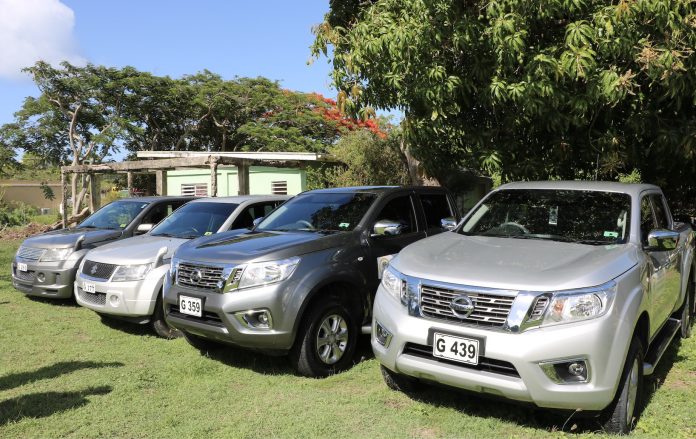 NIA CHARLESTOWN NEVIS — The Department of Agriculture in the Nevis Island Administration (NIA) is now better placed to increase its efficiency, thanks to the administration’s provision of four new vehicles valued at just under $200,000.

Hon. Alexis Jeffers, Deputy Premier of Nevis and Minister of Agriculture—while handing over the keys to the two Nissan Frontier Pick-ups and two Suzuki Escudos to the department’s senior staff on July 21, 2020, at the Prospect Agricultural Station—noted that the vehicles will serve the farming sector well, given the elevated interest in farming on Nevis.

“We know that there is increased interest in farming here on the island of Nevis, in backyard farming, and also our longstanding commercial farmers. They have really up their game in terms of production, and indeed these vehicles would be used to access these farms to lend the support to our farmers.

“As I said before, backyard or the established farmers do need the support in terms of technical advice, equipment and also any other input that can be had from the Department of Agriculture,” he said.

The Agriculture Minister explained that the department has been in possession of the vehicles since earlier in the year and their use will pay dividends during the difficult time, as a result of the COVID-19 pandemic based on the administration’s thrust of food security over the years and increased production and the plans it had already laid out for 2020.

He said the vehicles are indicative of the administration’s effort to grow agriculture and to support the agricultural sector to the point where the goals they had set out would be accomplished.

Mr. Jeffers stated that with the improving road network on Nevis, farms which in the past had been difficult to reach now have access and the Department of Agriculture had to provide the necessary tools to provide critical support to farmers.

“Back in the day when the extension officer came to the various farming communities and they were on motorcycles. Now, in terms of modern times we have graduated to four-wheel drive vehicles, jeeps as a matter of fact, reason being that the road network has improved and some of the remote farms…have adequate access, and also farms that are in our farming belt in New River, Cades Bay, Potworks, Indian River. Those are now accessible by four-wheel drive vehicles.

“We thought about this process long and hard, and we have come up with these vehicles to support all of the staff with livestock, crop farming, and of course we have had in the past where we have presented to the general public vehicles for the fishing sector,” he said.

The Agriculture Minister made it clear that the vehicles were purchased prior to the advent of COVID-19, and that the process for procurement had already began.

Mr. Jeffers admonished those operating the vehicles to take care of their tools.

“With these are significant investments the cost of operation continues to increase day after day, and I want to admonish the operators as well to park them up at evenings… You will be minimising the expenditures that are associated with driving them unnecessarily but also you are actually adding to their life in terms of having them available for years to come,” he said.

The minister thanked the senior staff and management of the Department and Ministry of Agriculture who came up with the idea of procuring the vehicles.

He also thanked the Cabinet of the NIA, through the Ministry of Finance, for supporting the Ministry of Agriculture in its quest to ensure that they provide the necessary transportation to the technical staff in order to achieve what they are mandated to do as a department and as a ministry.