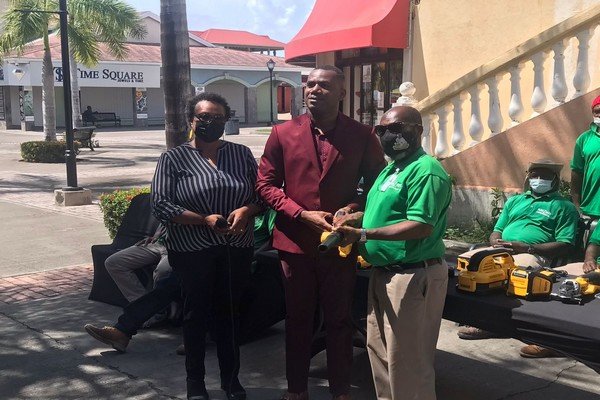 St. Kitts and Nevis (WINN): Deputy Prime Minister Shawn Richards continues efforts to aid in the investment of the tourism industry in the Federation through the St.Kitts Urban Development Corporation on Port Zante.

In the second of three promised donations, the Minister of Urban Development personally donated EC$4,300 worth of power tools to help in the upkeep and beautification of Port Zante.

At a short ceremony on October 1, outside the UDC office on Port Zante, the minister had this to say, “UDC has and will continue to play a critical role in the reopening and the reenergizing of the tourism industry and, by extension, the country’s economy. As evidence, cruise ships are again berthing onto our shores, and thus my donation to UDC seems very timely. Accordingly, it is now my pleasure to turn over ten top name-brand power tools to the maintenance team at UDC. The local retail price of this donation amounts to EC$4,300. The items include [sanders, saws, blowers and drills.]” 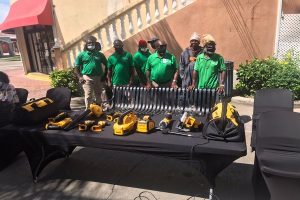 With the restart of cruise tourism at Port Zante and the new ship expected, the maintenance of the area is of paramount importance.

Allister Williams, a representative from the Ministry of Tourism, thanked Richards for the donation and encouraged others to do the same to rebuild tourism.

“As you know, the UDC is an integral part of tourism. They are one of our key stakeholders, and a donation such as this one will go a long way in improving the product and ensuring that St. Kitts and Nevis remain high on the tourist agenda as far as visitors are concerned because beautification is a key element of the experience. We want to again thank the Honorable Deputy Prime Minister for this donation and to encourage others to come forward and do likewise, [as we work towards rebuilding tourism here in St Kitts].”

Richards promises the third of his donation before the end of 2021. So far, he has personally donated EC$6,300 to the UDC.