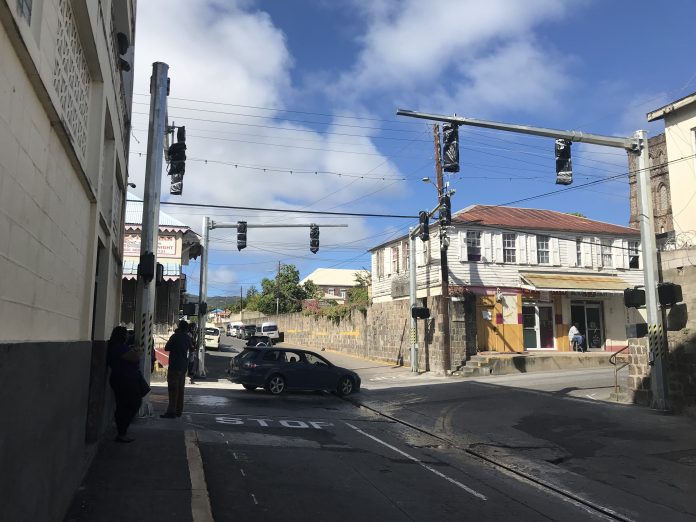 St. Kitts and Nevis (WINN): The traffic lights are to be commissioned following a visit by an engineer from Jamaica, says the Hon. Shawn K Richards, Minister responsible for Public Infrastructure, Posts and Urban Development.

Several lights were installed throughout Basseterre and the capital’s outskirts and have yet to be commissioned.

Junction of Wellington Road and Dickenson Street at the Gas station

The last listed, Bird Rock and Bay Road Intersection, needed additional work as slip lanes for ease of traffic were being undertaken.

People who have traversed that intersection would observe that the road has been widened and asphalted. However, the slip lanes have not been illustrated physically to show the change in traffic protocols there.

During the Prime Minister’s Press Conference on Thursday, January 9, Minister Richards updated the general public about the traffic lights.

“I say to you that on the 5th of March, we have a traffic engineer who arrives on island from out of Jamaica by the name of Mr. Cross. When he comes on island, the expectation is that the traffic lights will be commissioned. However, I want you to note that there is one exception. We’re still navigating some issues relative to the traffic light at the junction of the Newtown Bay Road and Bird Rock.”

Minister Richards said he is not certain if the issues in that area will be navigated before the engineer arrives. However, if the issues are not rectified, he said, all the other lights will be turned on shortly after Mr. Cross arrives, except for the junction at Bird Rock and the Newtown Bay Road.

The traffic light project began in January 2021, and the traffic lights have been erected at all seven intersections by the contractor for the project, Synergy Engineering Limited, of Jamaica.

According to an Engineer with the Department of Public Works, the slip lanes were expected to be completed in May 2021 but faced several issues, including delays involving property owners, business owners requesting other alternatives, and restrictions on movement during high COVID-19 transmission in the Federation last year.