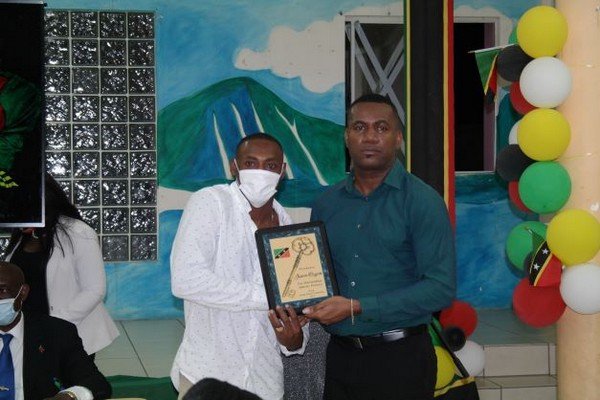 The deputy prime minister shared the sentiments at a Recognition Ceremony in Honour of Rogers held at the Sandy Point Community Center on Wednesday (August 26, 2021). The ceremony was organized by a committee from the Sandy Point community, where Rogers is from.

Honourable Richards noted that Mr. Rogers achieved a remarkable feat by representing the twin-island Federation at many world-class competitions, including the Olympic Games in London 2012, Rio de Janeiro 2016, and Tokyo 2021.

“Jason is a humble person who grew up right here in Sandy Point,” the deputy prime minister said, noting that the area where Jason was raised is not an upper-class neighbourhood. “Against all of the odds, against all of the alternatives that he could have chosen, he remained on a positive path and that positive path has taken him all over the world.

Honourable Richards stated that Mr. Rogers stands as a shining symbol of hope for many younger athletes aspiring to represent St. Kitts and Nevis in the international arena. He encouraged the 29-year-old sprinter to do his best to encourage and support the younger generation.

The deputy prime minister indicated that the government will continue to invest in the sporting infrastructure and the development of athletes.

In response, Mr. Rogers said that he was at loss for words by the outpouring of support and thanked all who supported him over the years. He pledged to continue to positively represent the Federation and its people on and off the track.

The recognition ceremony was attended by officials from the government, representatives of the sporting fraternity, as well as family, friends and well-wishers from Sandy Point and further afield.