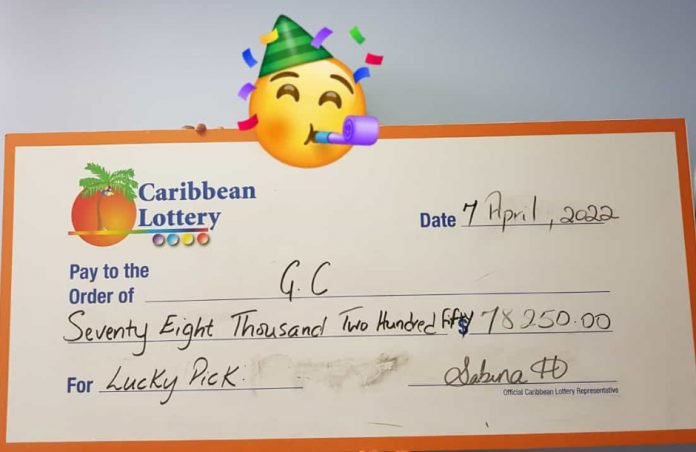 G.C., who has been playing the game since being introduced to it by her father, noted that this is the first time she has gained such a significant reward in over a decade of playing Lucky Pick.

“I didn’t know what to choose and my dad told me to let the machine choose.  I had to go to a funeral, so I left the tickets with my dad.  He called me to tell me I won some money, but I thought it was about $10 on the Super Lotto which is what I normally win.  He said no, I won ‘money’, but I still could not believe it,” said a surprised G.C.

Despite her previous unsuccessful attempts with Lucky Pick and marginal wins with Super Lotto, G.C. explained that her consistency was fuelled by her desire to win and not be broke anymore.

“I was broke.  If you want something, you keep at it. When you feel like you are not getting anywhere that’s when the luck comes. It’s my first time winning such a big amount. It’s a long way from the $10 I am used to winning and it is going to take some time to process,” G.C. remarked.

She purchased her winning Lucky Pick ticket for Draw #2940, with the quick pick numbers 20, 22, 24, 25, 27 from the Caribbean Lottery Retail Agent location at Arlene’s Bar recently.

Site Manager for the Caribbean Lottery, Ms Paula Williams congratulated G.C. on her first big win. “The Caribbean Lottery team is so pleased to present the Lucky Pick winning prize of $78,250 to G.C. She is a real testament to how consistency leads to success. We wish her many more big wins and the best of luck with her winnings.”