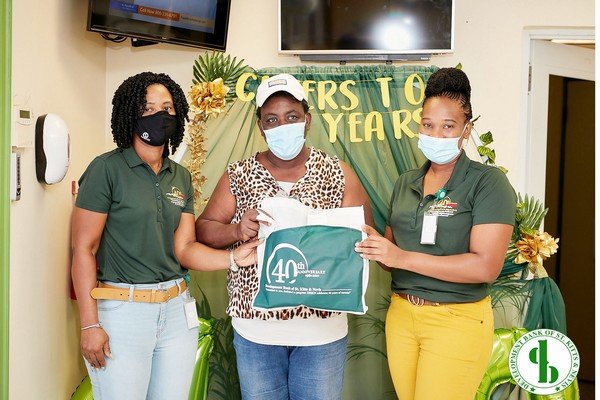 BASSETERRE, ST. KITTS, June 1, 2021 (DBSKN) — As the Development Bank of St. Kitts and Nevis celebrates its 40th anniversary, customers were on Friday, May 28 appreciated during a Customer Appreciation Day simultaneously held at the head office in Basseterre, and branch office in Charlestown.

“The Development Bank of St. Kitts and Nevis had for its 40th anniversary, observed under the theme ‘Committed to you, dedicated to progress: DBSKN celebrates 40 years of Success’, made arrangements to hold a Customer Appreciation and Business Fair dubbed ‘BIZFEST Let’s Celebrate Entrepreneurship Together!’ on Friday, May 28, but this did not happen as we had planned with our royal customers in mind,” observed Co-Chair of the 40th Anniversary Celebrations Committee, Ms. Chantelle Rochester.

According to Ms. Rochester, who is the Bank’s Marketing and Product Development Officer, the current Covid-19 Emergency Protocols in place called for the scrapping of mass-gathering events.

“While permission to hold the Business Fair to have been held at the West Independence Square in Basseterre and Chapel Street in Charlestown was withdrawn by the National Covid-19 Task Force in the interest of our people, we decided to proceed with a scaled down Customer Appreciation Day as we would be in a position to control the flow of our clients into the banking hall,” stated Ms. Rochester.

Bank clients had started queuing outside the two offices before the official opening hour of 8:00 a.m. Special tokens were reserved for the first client in the banking hall both in Basseterre, and in Charlestown, the first five clients at the cashiers’ desk and the first five at the reception desk. While all customers received tokens, also reserved for special tokens was the fortieth client at each of the offices.

“Since the Customer Appreciation Day had been announced earlier, and the fact that it was at the end of the month, traffic was relatively high but we ensured that strict social distancing and hand sanitising protocols were observed by those waiting outside,” pointed out Ms. Rochester. “A few of our clients who normally pay their loans through salary deductions meaning that they rarely come into the banking hall received their tokens at the entrance of the Bank without having to come into the banking hall.”

“Although the event was scaled down, our staff had cordial interactions with our clients who left with the feeling of satisfaction that the Development Bank of St. Kitts and Nevis truly makes a sustained difference in their lives,” concluded Branch Manager at the Nevis office, Ms. Hyacinth Pemberton.

Chairman of the Board of Directors of the Development Bank of St. Kitts and Nevis is Mr. Warren Thompson, while the Chief Executive Officer is Mr. Lenworth Harris.