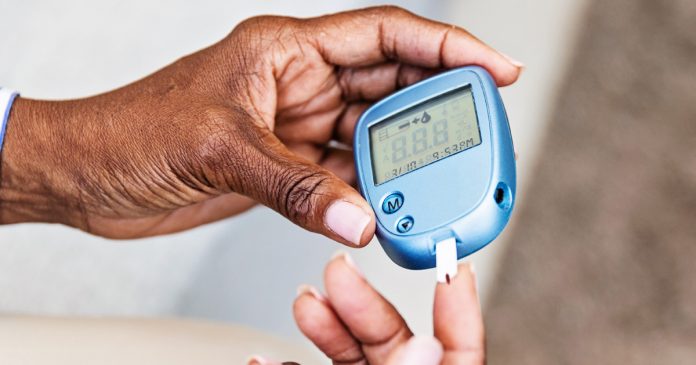 O’Loughlin shared some alarming figures coming out of the St. Kitts Diabetes community and expressed the need for individuals to take the medical problem seriously.

O’Loughlin revealed, “We, locally, if we were to bring things closer home, we estimate that we are having at least 3,000 diabetics in St. Kitts, three thousand with a “T”. Of those, we at our Kidney Clinic at the Joseph N France General Hospital- where we take care of persons who as a result of Kidney Disease and Kidney Failure they attend, the last population check [revealed that] we were having at least 250 persons attending that clinic [and] a significant number of them are suffering from diabetes.”

He added, “We all know what Dialysis is, it’s an artificial kidney used to clean your blood when your own natural kidney is no longer able so to do and from my last check we were having 33 persons on Dialysis at the Joseph N France General Hospital Kidney Clinic at the Dialysis Unit. A vast majority of those are persons living with Diabetes.”

The St. Kitts Diabetes President also shared, “If you look at our amputation rate- and we all know what amputation is- Amputation quite often comes about as a result of complications of diabetes and annually, we’re looking at 20 to 25 having unfortunately to undergo that particular type of surgical procedure. [That is] significant numbers again within the Diabetes community. I say and reflect upon these numbers to give an idea as to the seriousness of Diabetes and the seriousness to which it should be taken.”

According to the International Diabetes Federation, approximately 537 million persons worldwide have Diabetes, representing approximately 10% of the world’s population.

A new report by the Pan American Health Organisation published on November 11, 2022, states, “Growing rates of obesity, poor diets, and lack of physical activity, among other factors, have contributed to a more than three-fold increase in the number of adults living with diabetes in the Americas in the past 30 years.”

In addition, PAHO disclosed, “Two-thirds of adults in the Americas are overweight or obese, and only 60% get enough exercise. The report also points to an alarming trend among young people in the region: over 30% are now considered to be obese or overweight – almost double the global average.”

The PAHO publication further revealed, “At least 62 million people live with diabetes in the Americas, a number which is expected to be much higher given that around 40% of those with the disease are unaware they have the condition. If current trends continue, the number of people with diabetes in the region is projected to reach 109 million by 2040.”

Diabetes is a chronic metabolic disease characterised by elevated levels of blood glucose. Type 2 diabetes is the most common type, which usually occurs in adults when the body becomes resistant to or fails to produce enough insulin. Type 1 diabetes occurs when the pancreas produces little or no insulin by itself.

According to PAHO, Diabetes is the sixth leading cause of mortality in the Americas which caused more than 284,000 deaths in 2019. It is also the second-highest cause of disability in the region. As such, PAHO calls on countries to improve early diagnosis, increase access to quality care for diabetes control, and develop strategies to promote healthy lifestyles and nutrition.