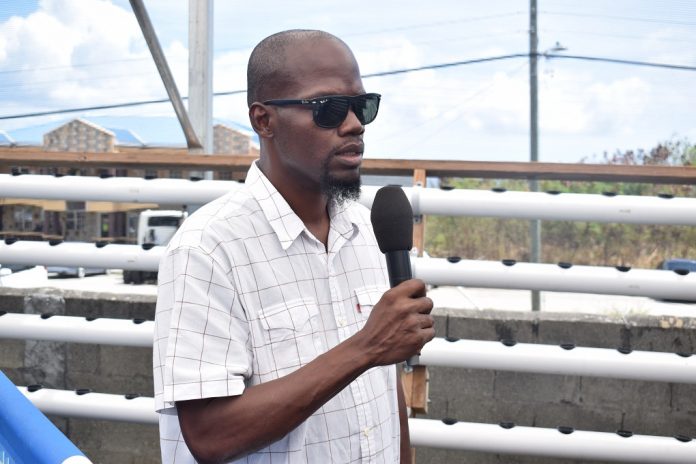 Basseterre, St. Kitts (SKNIS): The COVID-19 pandemic which has caused a major economic global downturn has also created an environment where countries are unwilling to trade with one another as they are more concerned with their own citizens.

This was explained by the Director of Marine Resources, Dr. Marc Williams, during an exclusive interview with SKNIS on March 23 at the Greenleaf Farm where he said that because of this, the Federation of St. Kitts and Nevis has to produce its own food for its citizens.

The way forward Dr. Williams said, is through aquaponics.

Aquaponics as defined by the Food and Agriculture Organisation is a symbiotic integration of two mature disciplines: aquaculture and hydroponics. It is a system of aquaculture in which the waste produced by farmed fish or other aquatic animals supplies nutrients for plants to grow hydroponically.

He said that previously the land would have been covered with sugar cane fields but due to the population increase within the Federation, land needed to be allocated for residential use.

Aquaponics he said can be set up in any location saying that “places like Israel are able to cater to their citizens and these areas are very, very arid areas.”

“This project came about as a result of our aquaculture development strategy that we established in 2013 from 2013 to 2023.”

“We received assistance from the FAO to do some aquaponics training within the course of this year and this week we started our first training workshop in the aquaponics development so that St. Kitts and Nevis can sure up its food and nutrition insecurity issues,” said Director Williams.

He explained that the main priority of the Federation of St. Kitts and Nevis is to be able to produce enough food for its citizens.

“Aquaponics or aquaculture is now under a similar umbrella as a way we can provide food for our citizens,” said Dr. Williams.

The Greenleaf farm is owned by Stuart LaPlace. His aquaponics farm has over 700 fish. Mr. LaPlace is the facilitator for the FAO training in aquaponics development currently taking place in St. Kitts from March 22 to 26.