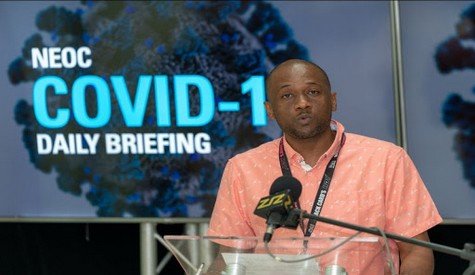 Abdias Samuel, Chair of the COVID-19 Taskforce and a Disaster Management Coordinator with the National Emergency Management Agency (NEMA), asked citizens and residents of the Federation to be compliant with the efforts of the Ministry of Sustainable Development and the Department of Statistics in this endeavour.

Samuel emphasised the importance of the census from a disaster management perspective.

He continued, “so again, please do your best to support the census operations and activities, cooperate. It’s something that again will be to the benefit of you, the citizens and the country by extension.”

As he explained, the demographics of areas most vulnerable to natural disasters are paramount to the response and recovery of that community.

One such area is Old Road, locally known to be battered from storms and hurricanes of the past.

While the Federation is accustomed to the possibility of a hurricane making landfall as we have a hurricane season, there is no season for tsunamis.

The exercise aimed to strengthen the nation’s tsunami protocols and early warning systems by testing first responders’ and residents’ responsiveness if there was an earthquake that could lead to the direct impact of a tsunami.

The after-action report from NEMA favoured the first responders but gave residents of Old Road a poor grade and said the evacuation exercises are essential in raising a person’s awareness.

NEMA noted that there was representation from the public sector, including the Royal St. Christopher and Nevis Police Force, the Fire and Rescue Services, the Ministry of Health, St. Kitts and Nevis Defence Force (SKNDF),  Red Cross, NEMA District volunteers, etc.

The report further noted a lack of response from Old Road and Verchilds area residents.

NEMA reminded residents that a tsunami could strike in minutes, giving little to no time to evacuate to a Tsunami  Evacuation Site.

What do you do in the case of a tsunami?

Head for high ground and remain there until an all-clear is given.