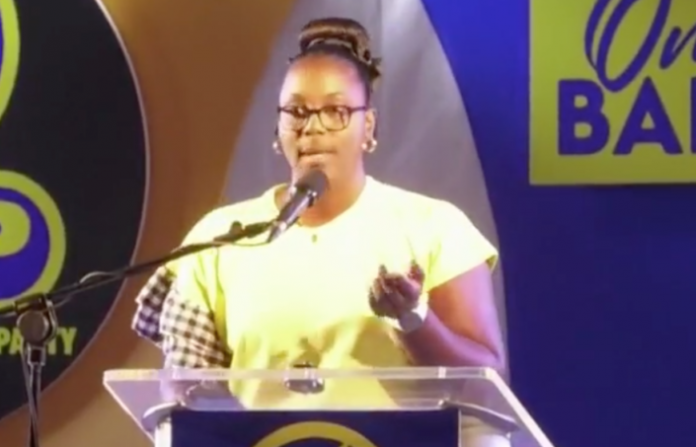 Armstrong unleashed a tirade against Mottley while addressing the DLP’s launch of its 2022 election campaign in Checker Hall, St Lucy on Wednesday.

“Checker Hall… in your representative Verla De Peiza and in me, Dawn Marie Armstrong, you have two women with families, with children, that truly understand what it is to sacrifice, that truly understand what it is to care, and you have our Prime Minister stealing our hard work, the blood, sweat and tears that we have put into bearing children and raising them in this country, coming again three and a half years later to say she still cares. But how, Ma’am? But how do you care? How have you shown it? What have you done?” she had said.

“And you all compare my president to this Prime Minister, and I say this without apology: You cannot compare a bulldog to a Great Dane; same animal but a different breed. And everything that you have said about my president is because she is a woman. She speaks like a woman, she talks like a woman, she carries herself like a woman. And I as a woman cannot stand here and allow her to be victimized for being who she is because the same fate will fall on me.”

The following day, Armstrong’s comments were roundly criticised, particularly on social media. One commenter on Twitter decried the “absolutely deplorable speech and behaviour”. Another stated: “This is so embarrassing and disgusting”.

By the afternoon, she issued a statement on social media apologising for her comments and asking for forgiveness.

“I am coming to you this afternoon, after much reflection and much consultation with those within the political community, to offer my sincerest apologies for the statements I made on the political platform in Checker Hall, St Lucy last night.

“I now understand the hurt that I have caused. I also understand that my troubling statements have offended many of you. Those who have followed me personally and professionally throughout the years and now politically, know that my intentions are pure and I am never meaning to cause offence to anyone. I can assure you that as I continue along the campaign trail and continue to contest for the seat in St George South, I will conduct myself with vigour, but most importantly at this time, grace. And all I can do is ask you to forgive me,” she said.

The Barbados Association of Endometriosis and PCOS (BAEP) had issued a statement saying they found Armstrong’s statement to be concerning, divisive and disheartening.

“We are distinctly aware of how difficult things have been for many single-parent homes in Barbados, especially during the past years. It is our hope that after the upcoming election, the newly-formed Government, however it is comprised, will indeed take stock and ensure that provisions are made to adequately support these and other families in need.

“However, it is completely inexcusable to utilise language that implicitly and explicitly dismisses and degrades the worth of women who do not have children. Women are powerful and multi-faceted, and while motherhood is a beautiful aspect of life, it does not determine womanhood,” the statement said.

The BAEP further noted that there were many reasons for women not having children – from exercising their right to active choice to experiencing reproductive challenges.

“Conditions such as endometriosis and PCOS are in the top 10 causes of female infertility and, as such, may cause significant levels of trauma to those who have them. The language and narrative within this public forum was not only unnecessary but possibly retraumatizing, with the potential to cause emotional and psychological damage to those who heard it,” the association said.

The statement also called on those responsible to reconsider the message and also invited them to have an open discussion on reproductive health conditions.