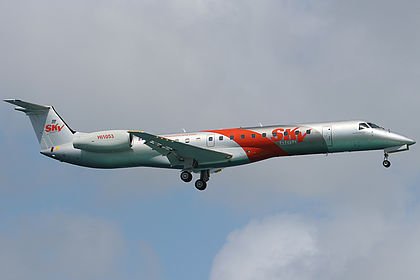 (Daily Herald) SANTO DOMINGO, Dominican Republic–Dominicano airline Sky High Aviation Services has resumed air operations to eight destinations in the Caribbean region after it was suspended in March due to the pandemic’s effect.

The airline is now able to book and sell tickets for eight destinations from Santo Domingo’s Las Américas International Airport AILA to Curaçao, Aruba, St. Maarten, Bonaire, Anguilla, St. Kitts, Antigua and Tortola, or as preferred, on one route.

The airline based at AILA began operations between Aruba and Santo Domingo, on Thursday, December 3, and its flight schedule for that route will continue on Thursdays and Sundays, according to a statement from the company.

Meanwhile, Sky Cana announced the arrival of its first plane to the Dominican Republic in a joint operation with Sky High, a company that will have operational responsibility.

According to a press release, the new national airline will begin operations on December 14, with Airbus 321 planes and a capacity of 220 seats.

The Airbus A321 is the largest member of the Airbus A320 family; it is a short-to-medium-range twin-engine commercial aircraft manufactured by Airbus.